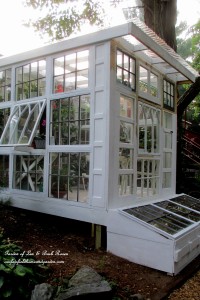 It all started with three antique windows. I had no idea why, but at $5 each, they had to come home from that yard sale with me. As my new treasures sat in the basement, my mind started percolating ideas on how to put them to use in our garden. They were too fancy for a coldframe and I didn’t want to mar their simplicity by covering them in paint or gee-gaws. But when I saw pictures on-line of greenhouses made from old windows, I knew that was the right kind of project to highlight them.

And, a greenhouse structure would fulfill my long-standing dream. For years and years, I have schemed on having a greenhouse of my own. But the costs of having a commercial build or even kit built were out of my budget. I didn’t want heavy-duty plastic on a pvc frame either, I wanted a permanent structure!

It took a year and a half of gathering windows from friends and family who were having window replacement home renovations. (contact window replacement companies – they often throw old windows in the landfill!) I stored them under tarps on a deck and in the garage. As it turns out, I could have started earlier, but I had no idea how many windows or sizes the greenhouse build would take. (I ended up using 28 windows and giving 40 away on craig’s list!)

During that time, I also saved money aside knowing that I would need to hire skilled help and muscles to pull this off. In my 60’s, with basic carpentry knowledge, I had the vision but knew I was not up to this task alone. I decided on an 8 ft X 10 ft lean-to structure that would be entered from our Garden Room (formerly a one-car garage at the back of the house). This way there would be less building required (only 3 walls) and heating/cooling sources could be shared. 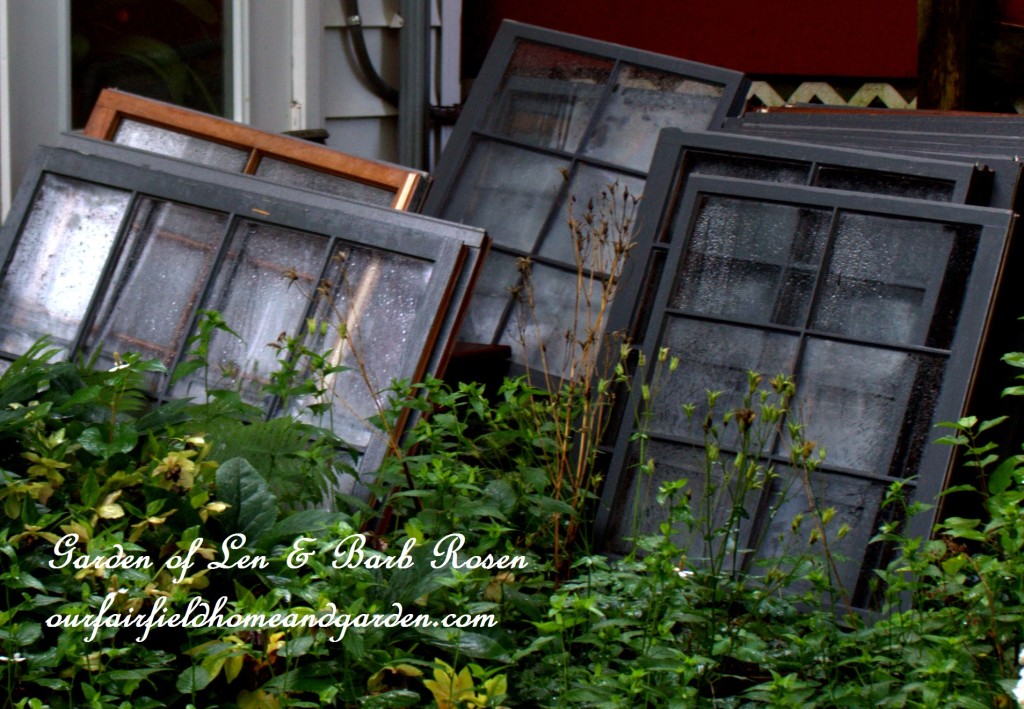 Old Windows ~ a greenhouse in disguise!

It took me a month just to move, divide and replant all the perennials that would be in the way of the project. But finally, the site was ready. I contracted with a wonderful carpenter friend who would work on an hourly basis because this job was so hard to estimate.

Day 1 of the greenhouse build was spent putting in footers  and decking joists covered by an 8 ft by 10 ft subfloor. Suddenly, it looked like this was really going to happen! 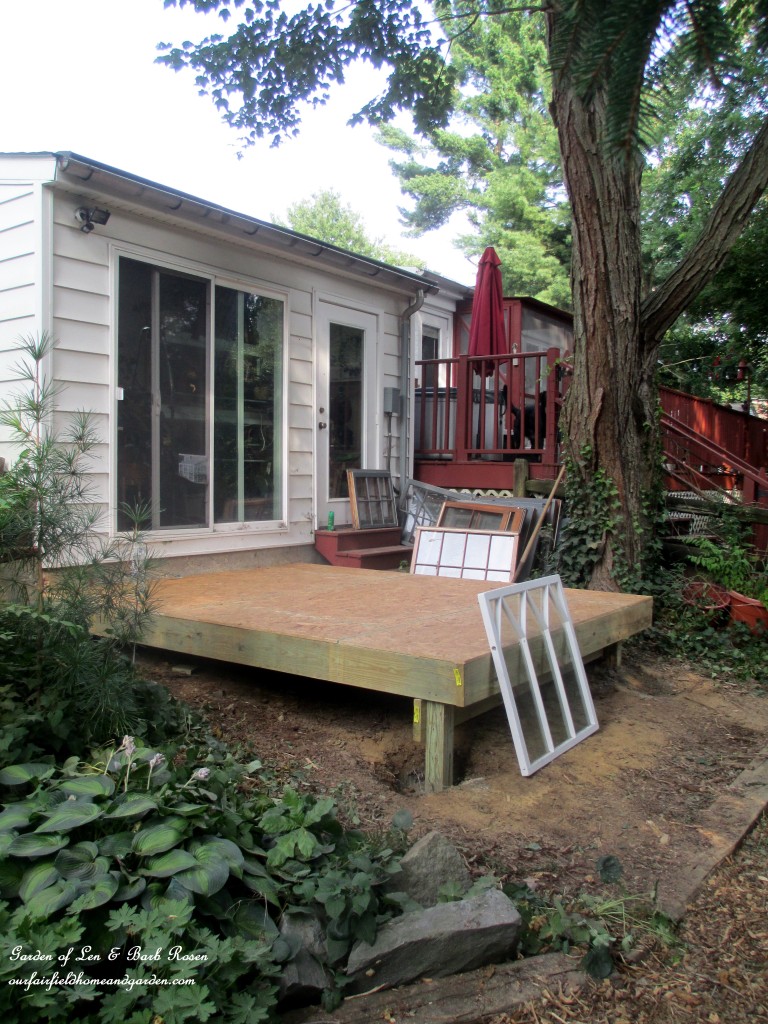 Footers, decking and subfloor in.

Laying out the windows to see how they would look before building was very important. This was not a standard build of any kind. Mixing up the sizes and shapes is key to getting a very unique look, I found. 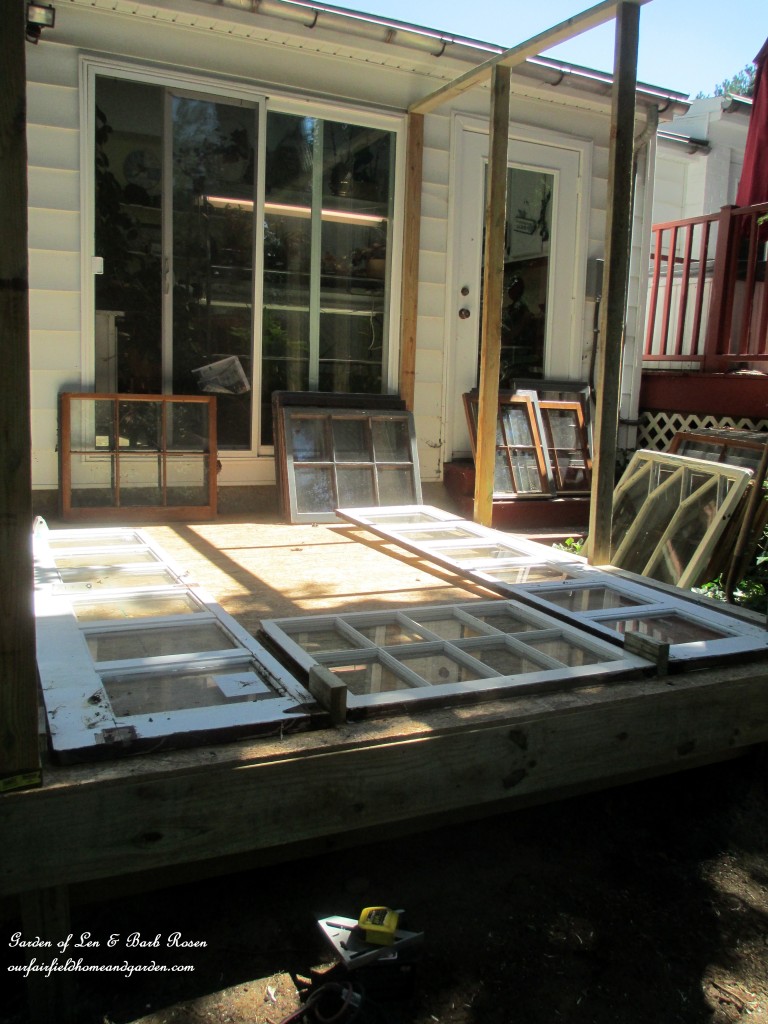 Laying out windows for the wall.

When we replaced our garage doors last year, I saved three panels: two with windows and one all wood . Our old garage doors were incorporated into the end wall of the greenhouse to make vertical windows. The top was trimmed off two of the garage door panels, and one of these cuts used in the center top of this wall. 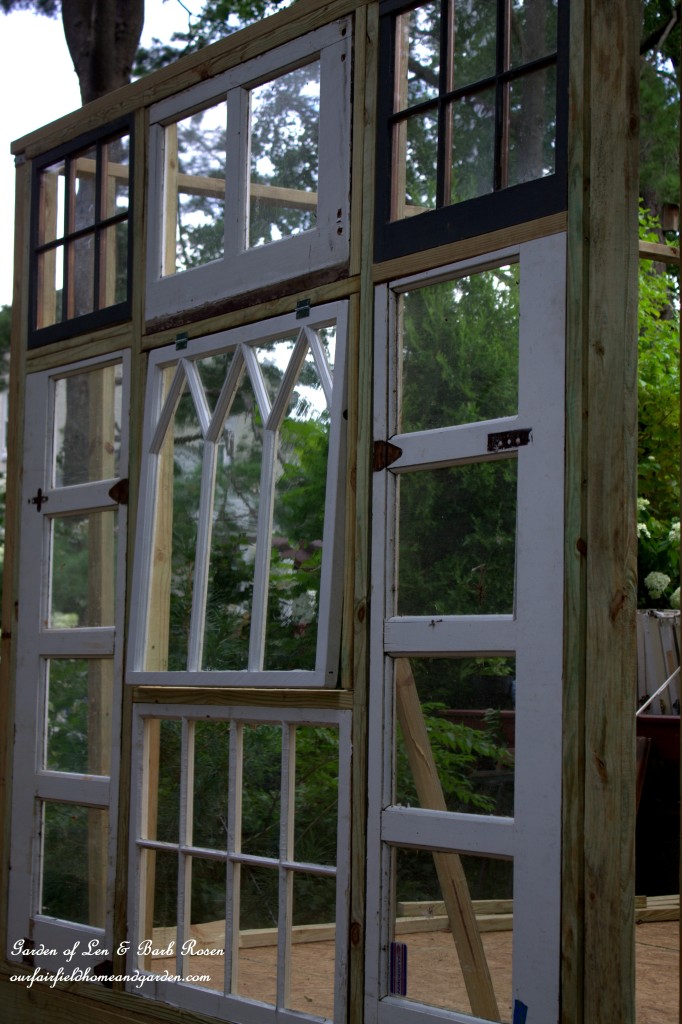 The wall framing measurements were based on the largest windows chosen for the base of the wall. I decided each side would feature the antique window in its center, the only windows that would be hinged to open. All the other windows would be framed and fixed in place. 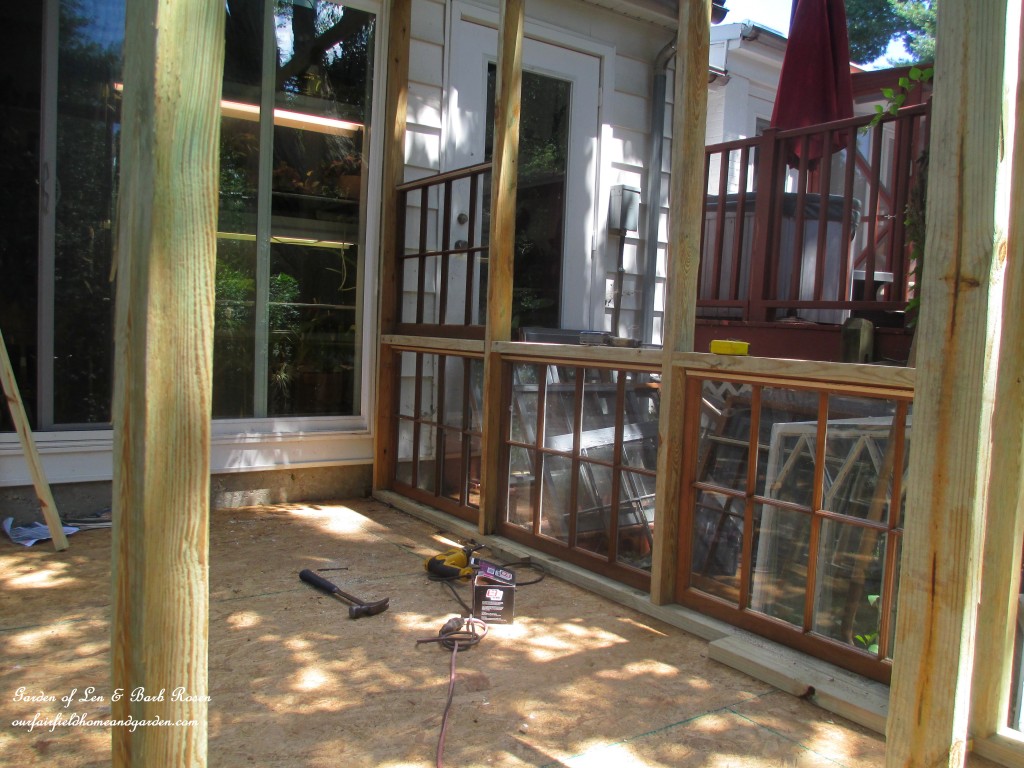 The walls are started.

Fitting the windows into the walls required that each window be framed individually. It was like a giant jigsaw puzzle, only the pieces were made up as we progressed. Many wooden window frames were cut to fit and extra wood strips added as needed where there were gaps. 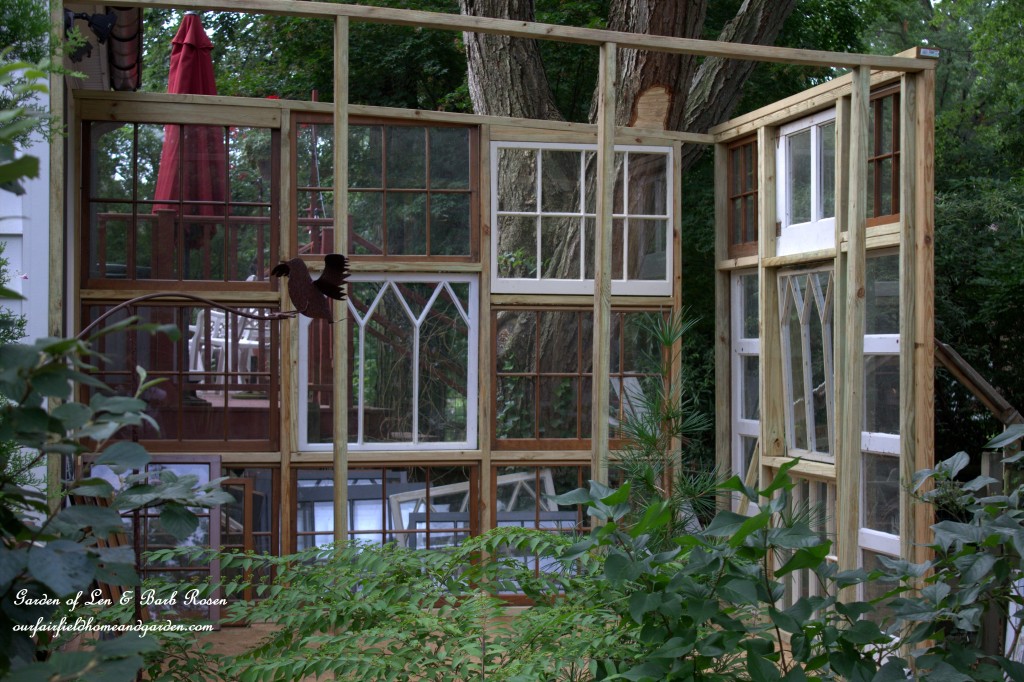 The greenhouse with two walls up.

After three days, the greenhouse walls were finally up and the roof framing in place for the roof panels. 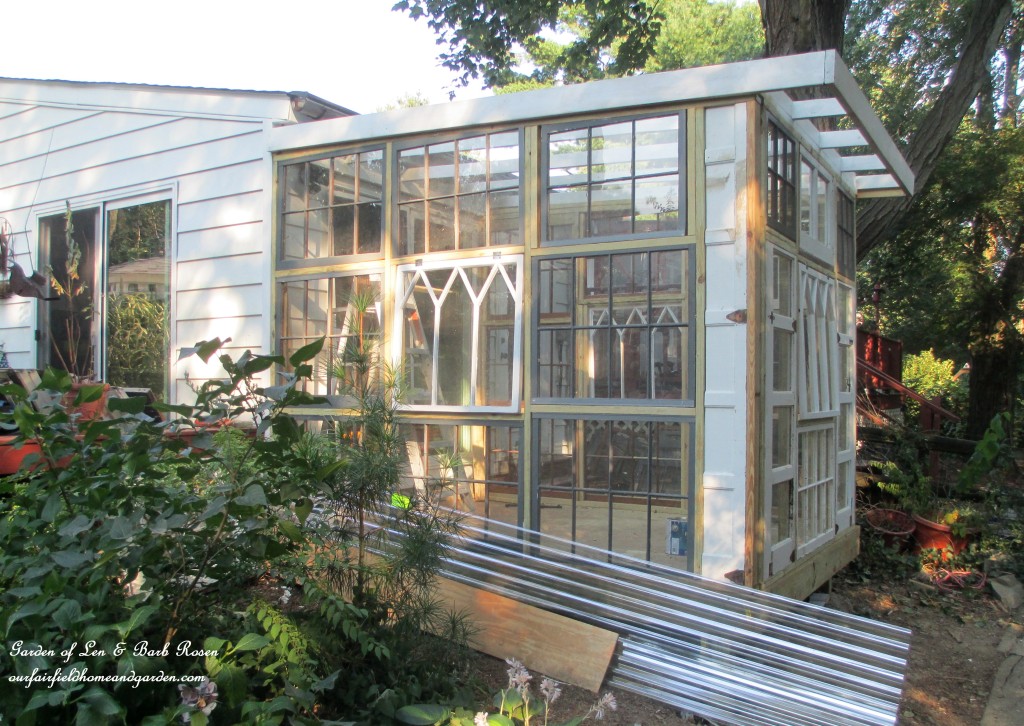 For roofing, I researched and chose Tuftex corrugated polycarbonate clear roof panels from Lowe’s. These panels overlap and are attached to the roof rafters with Tuftex fasteners which have a little waterproof gasket on each screw. An important step is to paint the tops of the roof rafters before attaching the roof panels. Otherwise you will not be able to paint them once the roof is installed. 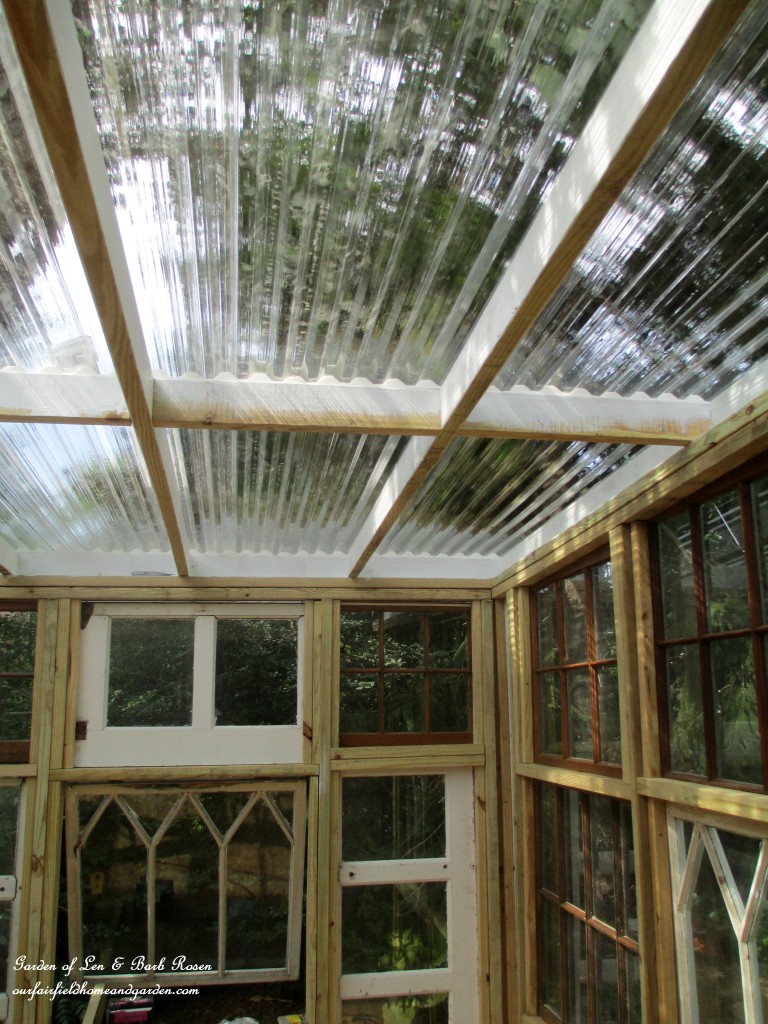 Tuftex 5-Pack Cross Link Polyethylene Solid Roof Panel Closeure Strips (from Lowe’s) sealed the gaps. This clever product fits exactly into the curves of the corrugated roofing to keep out hot and cold air as well as insects. 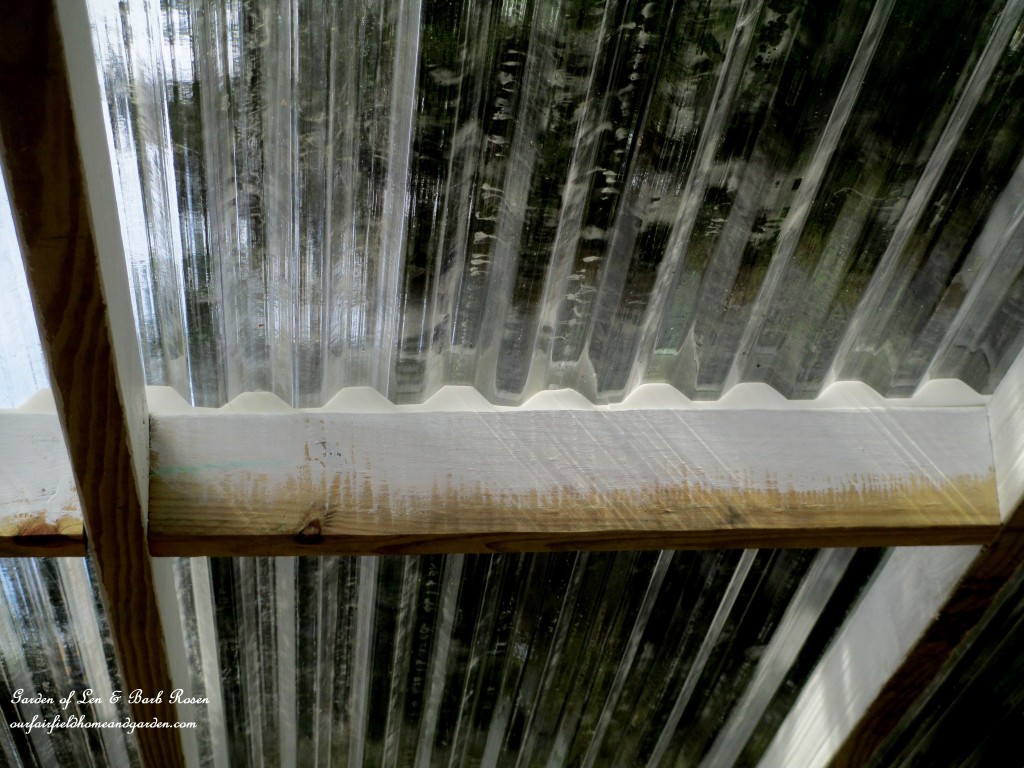 To use up the leftover wood, plywood and a few more windows, we added a large coldframe that runs the entire width of the greenhouse. Trimming the front of the box is the last bit of our old garage door! 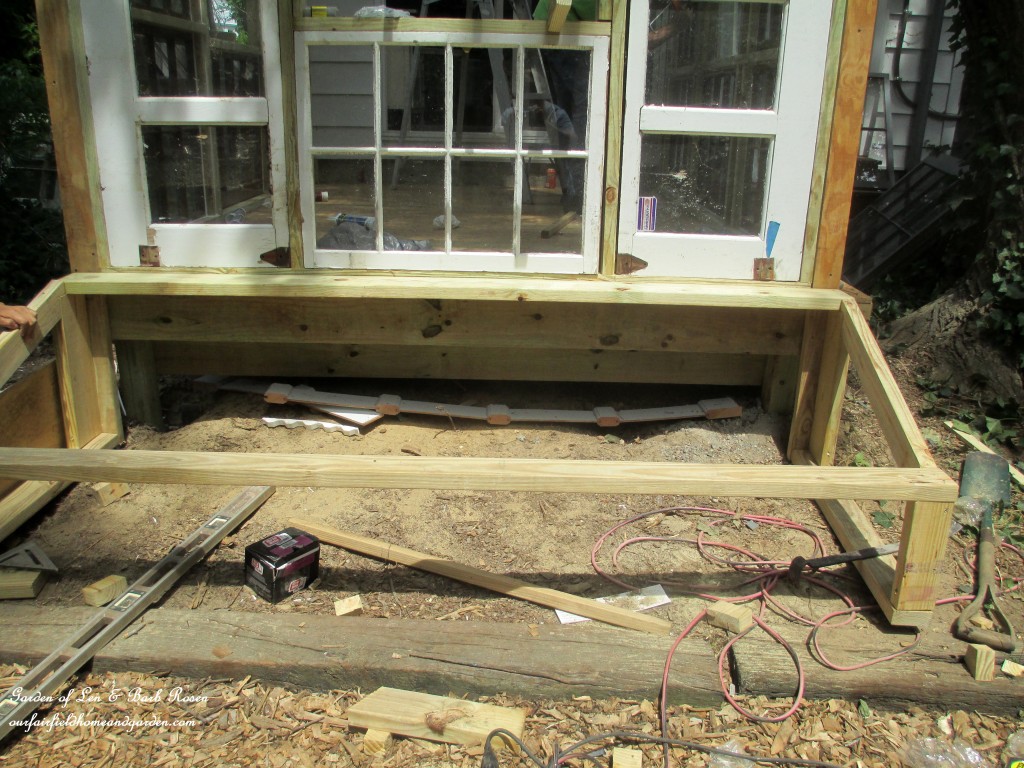 This large cold frame will be used for winter sowing, protected storage of small potted perennials and starting and hardening off new plants in spring. 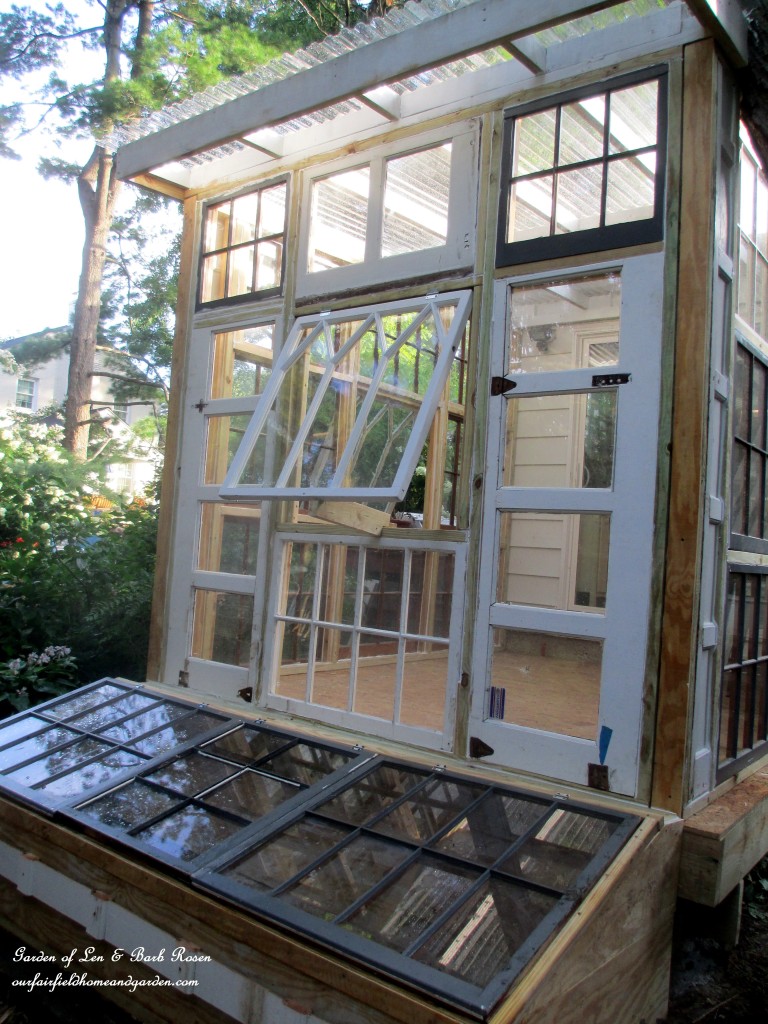 Coldframe added to the greenhouse

The building phase took a total of four days. The two front corners were closed in with wood pieces cut from our old garage doors. All the windows and framing were caulked carefully in preparation for painting. 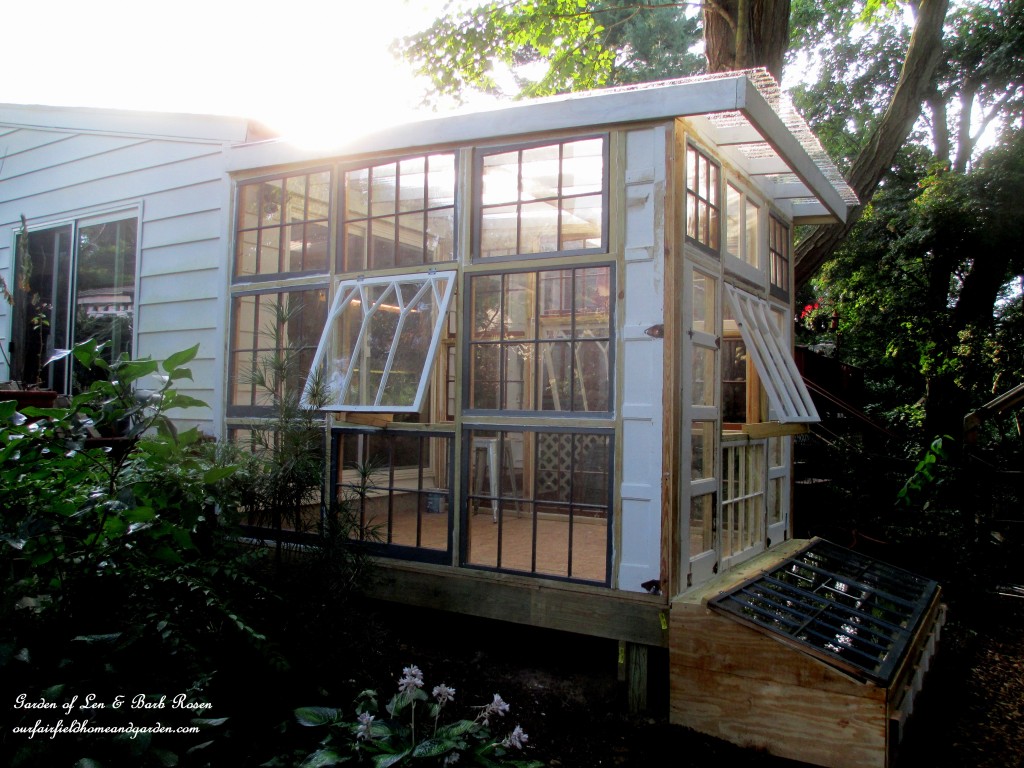 To seal and protect them, all framing and windows were painted first with Sherwin-Williams Multi-Purpose latex primer, then with Resilience exterior acrylic latex in extra white. The following pictures show the exterior while being primed. 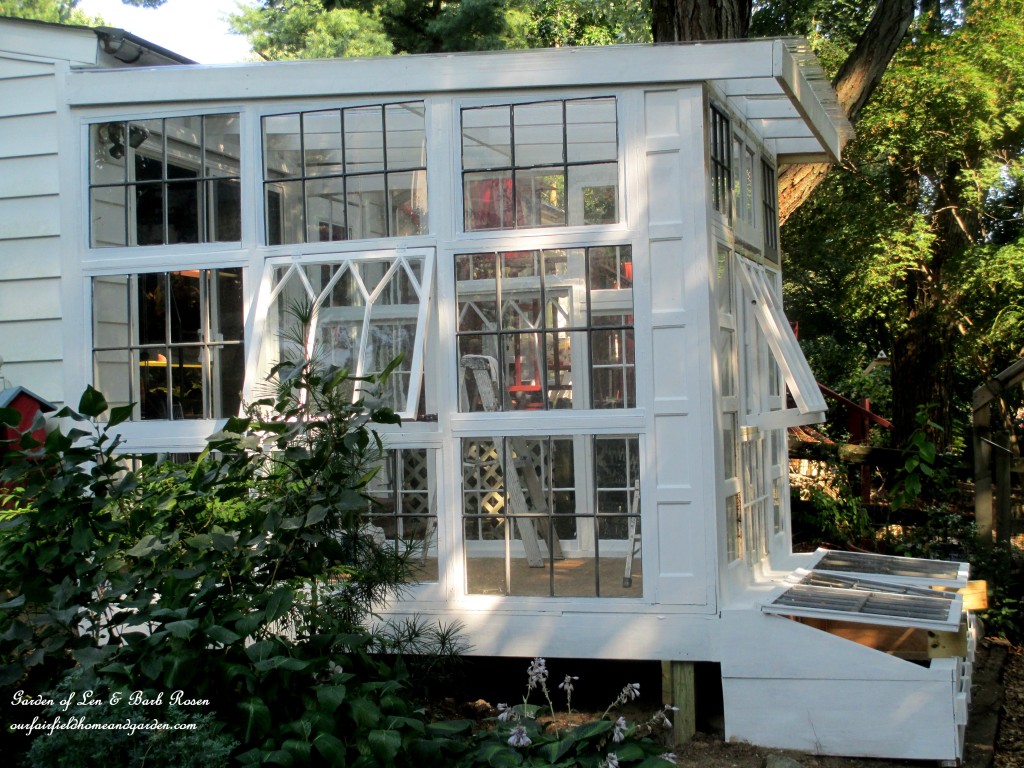 Exterior of the greenhouse after priming.

Here’s another view of the greenhouse exterior while it was being primed. 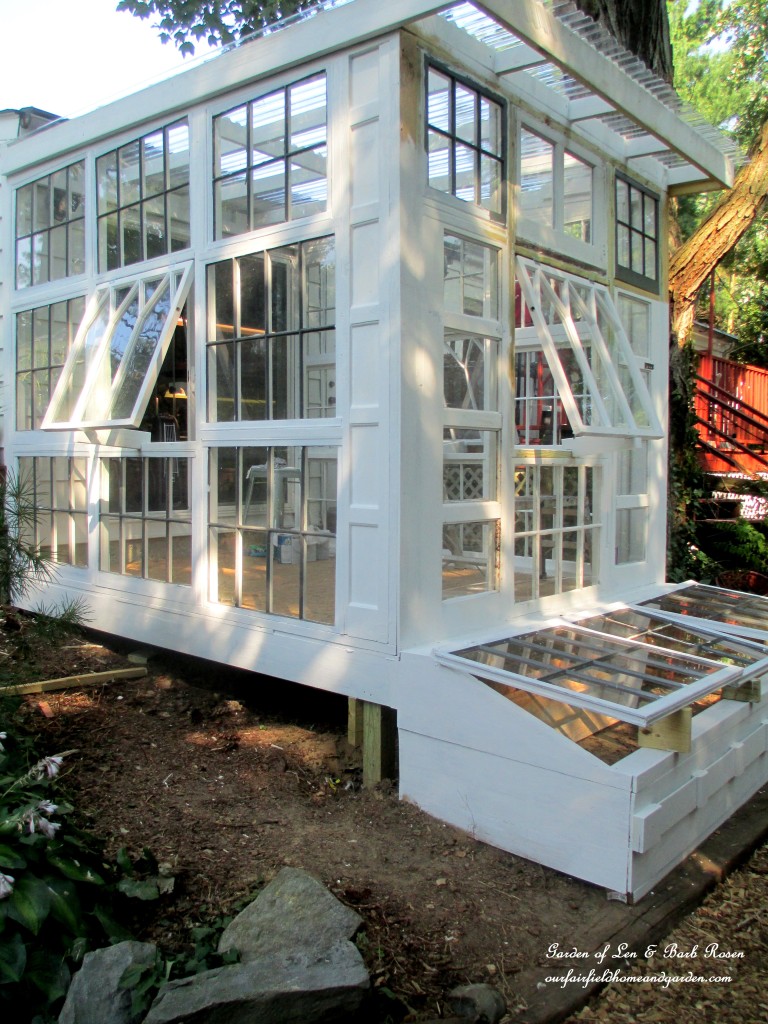 Painting all the windows with primer and paint was tedious. A tip I would pass along is to decide which windows will be used and paint them first before framing them in. With windows from floor to ceiling, this paint job took a long time to complete with lots of laying on the floor and ladder work.

It was now stinking hot in the middle of a humid Delaware August. I made the decision to hire a painter at an hourly rate here, too. Even though I can paint and pitched in, this was going to take me forever and a day by myself. But, the extra expense sure was worth it!  That white paint unified all the odds and ends of windows and transformed them into a conservatory! 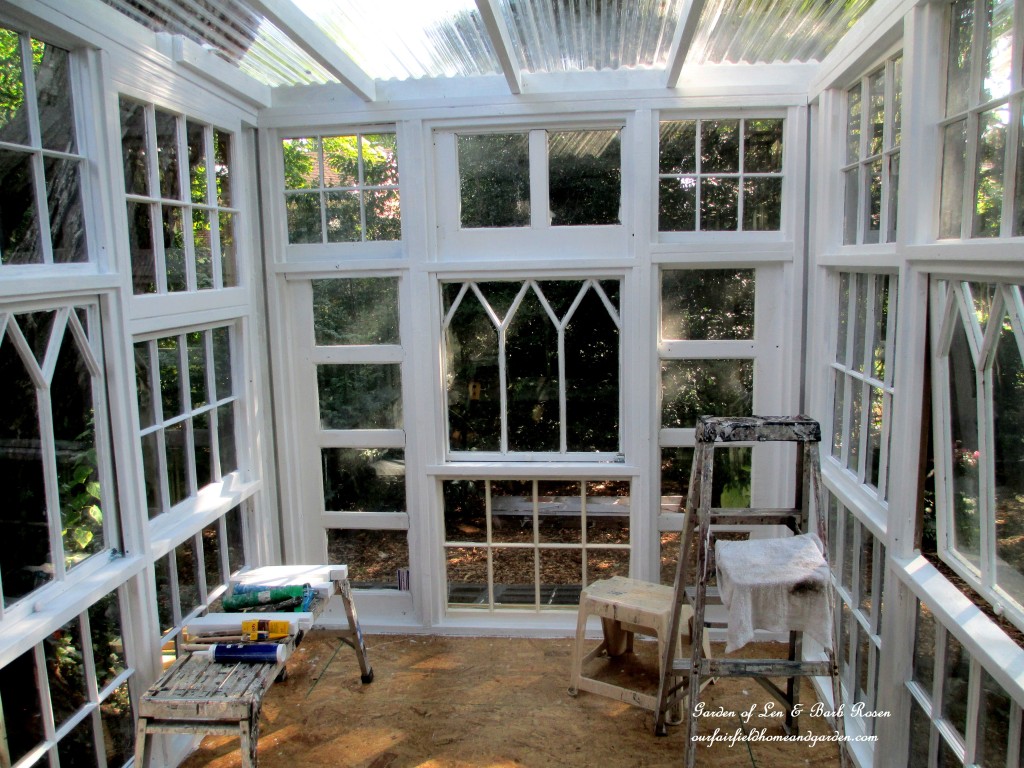 Painting the interior of the greenhouse structure.

Initially, I had thought I would just seal the subfloor with a good deck paint. But, to my delight, a friend gifted me with 50 square feet of leftover sand-colored ceramic tiles. That was a game-changer! Off I dashed to the clearance bin at the local tile store, where I found white tiles super cheap to create a border that would fill in the rest of the floor space.

After getting a couple estimates, I hired the tiling done. First, a vapor barrier was stapled down (from a new roll I found in a dumpster!), followed by backer board. Then thin set mortar was spread and the tiles put in place with spacers. After a day of drying, the grout was applied. Another day of drying! 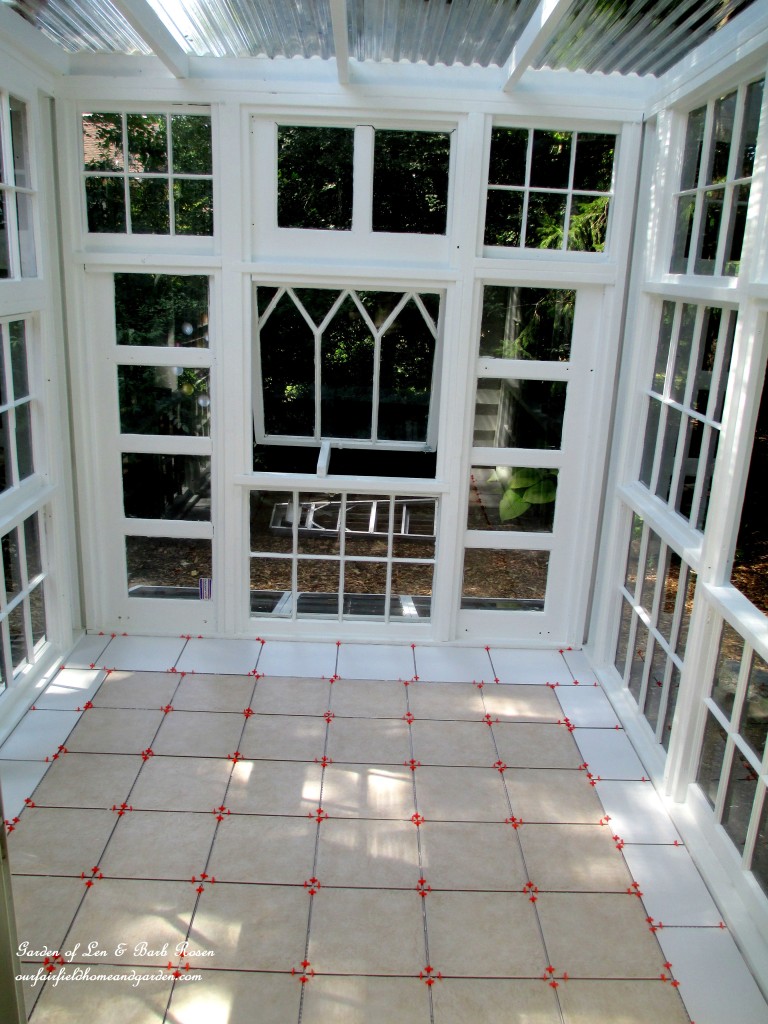 Finally it was move-in day! The grout was dry and I had a blank slate to fill with plants and garden accents. A little turquoise metal table gave me the inspiration to use only blue and green tones to keep the space from becoming too busy. I shopped my garden room for all the pieces and didn’t have to buy anything! 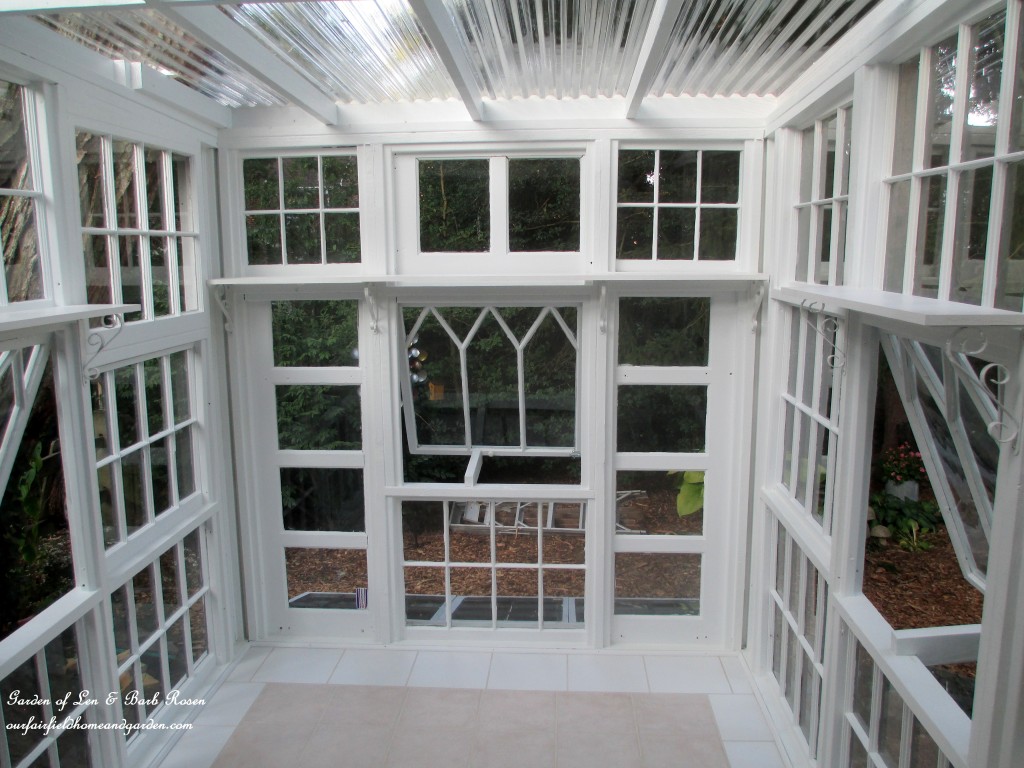 An antique wallpaperer’s table, I picked up for a song at a yard sale, is on one side of the greenhouse holding assorted houseplants. Underneath, a few of my potted Clivias have taken up residence. 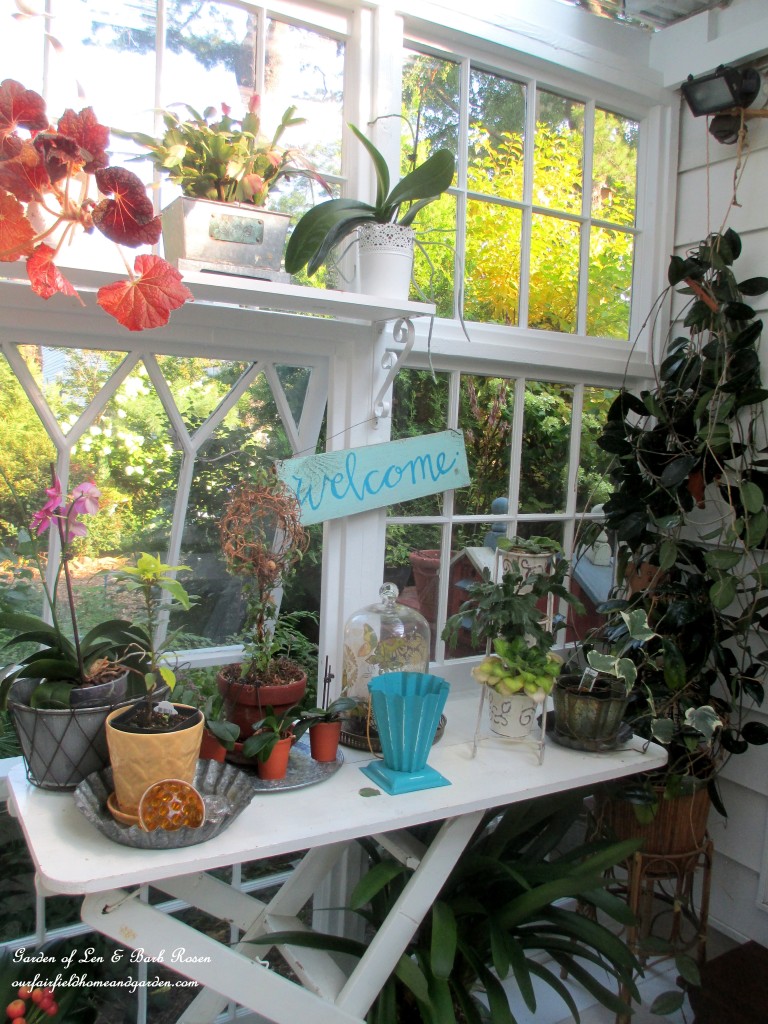 An old white ladder plucked from the curb makes a terrific place to stack lots of plants. Topped by a yard sale birdcage and little crafted birds for whimsy, it makes efficient use of this corner space. Plus, more potted Clivias are grouped underneath. 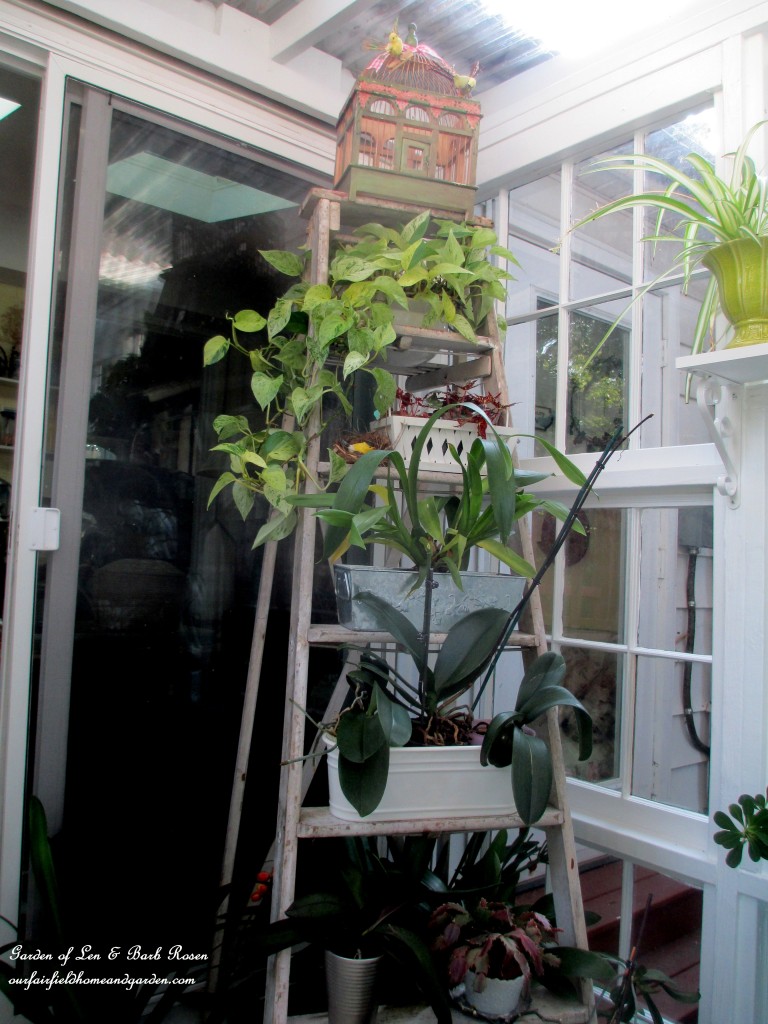 Here’s the greenhouse after one intense day of moving, cleaning and plant grooming. There is still tweaking to do; adding lights, a suspended ladder for hanging plants, making screens and more plants to be brought in this fall. And there is still another day or two of exterior painting to finish.

My  glass-topped vintage patio set looks perfectly at home here. It will serve to hold plants as well as be a great spot for sipping coffee and watercolor painting this winter.

And, now those three antique windows are part of real greenhouse and my dream come true! 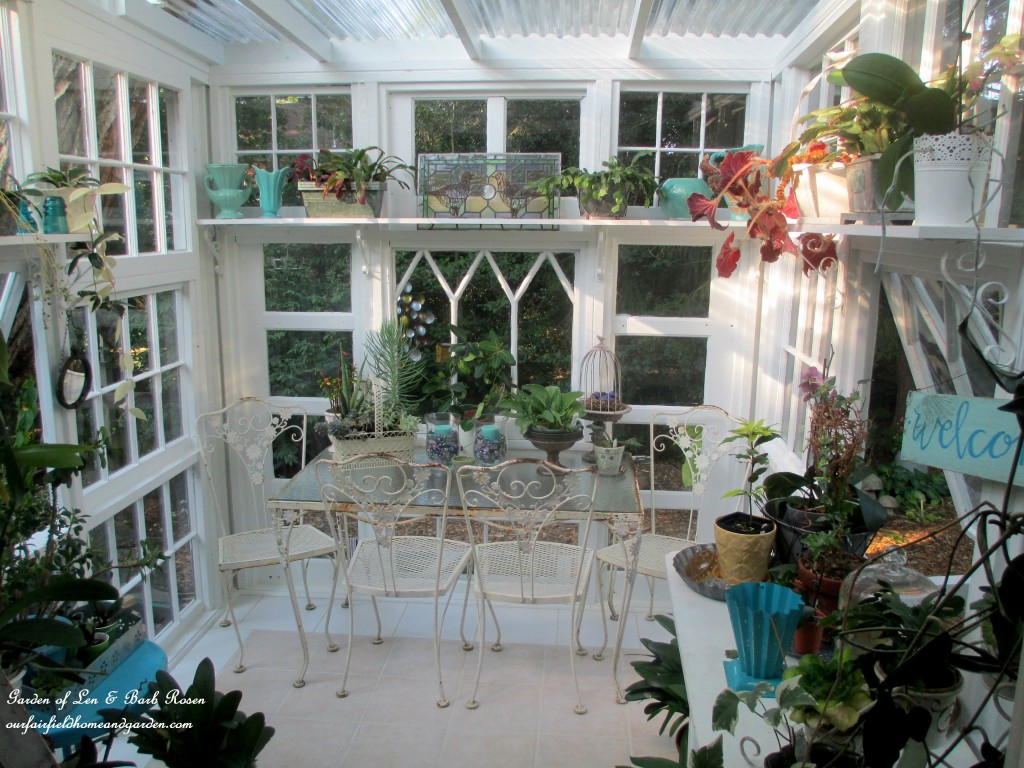 (I spent $1,695 on materials – the windows were free except for the initial antique ones. Labor costs were just over $2,000. If you are young, hardy and handy, you could do-it-yourself to save even more!) 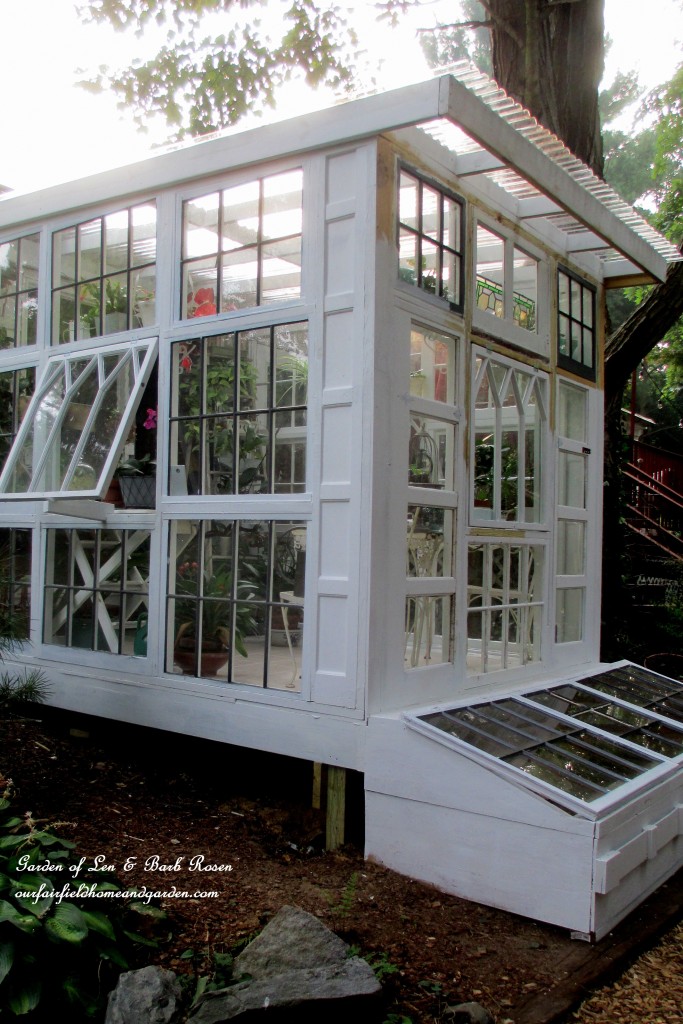 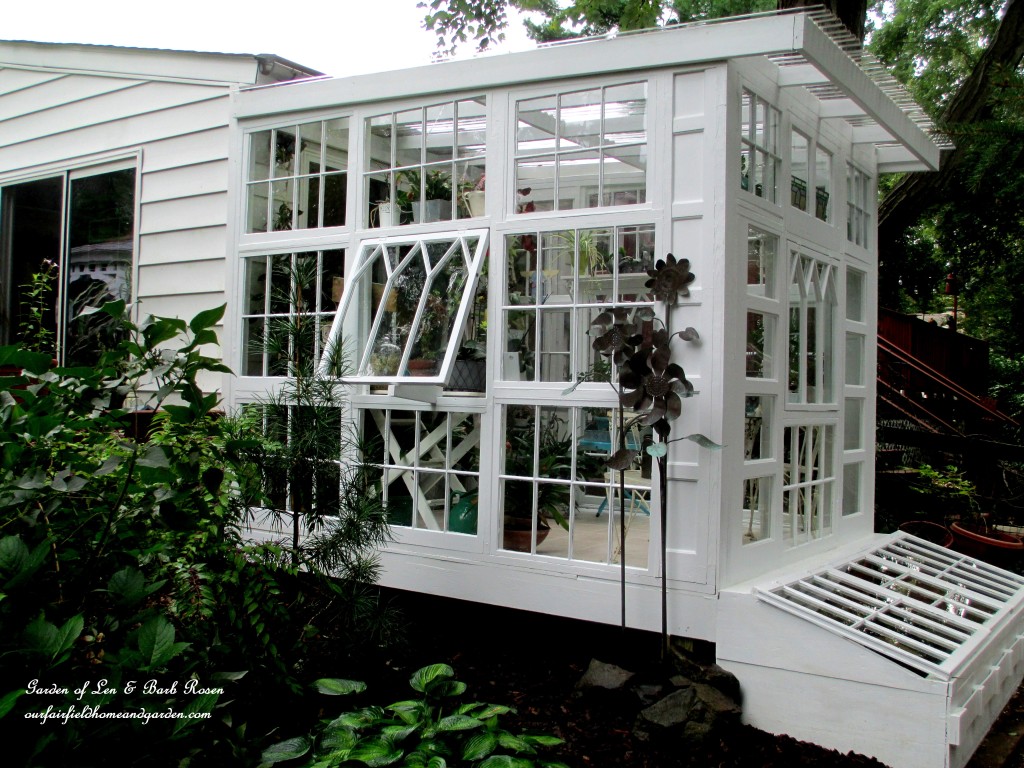 The Repurposed Windows Greenhouse is all painted ~ a true conservatory! 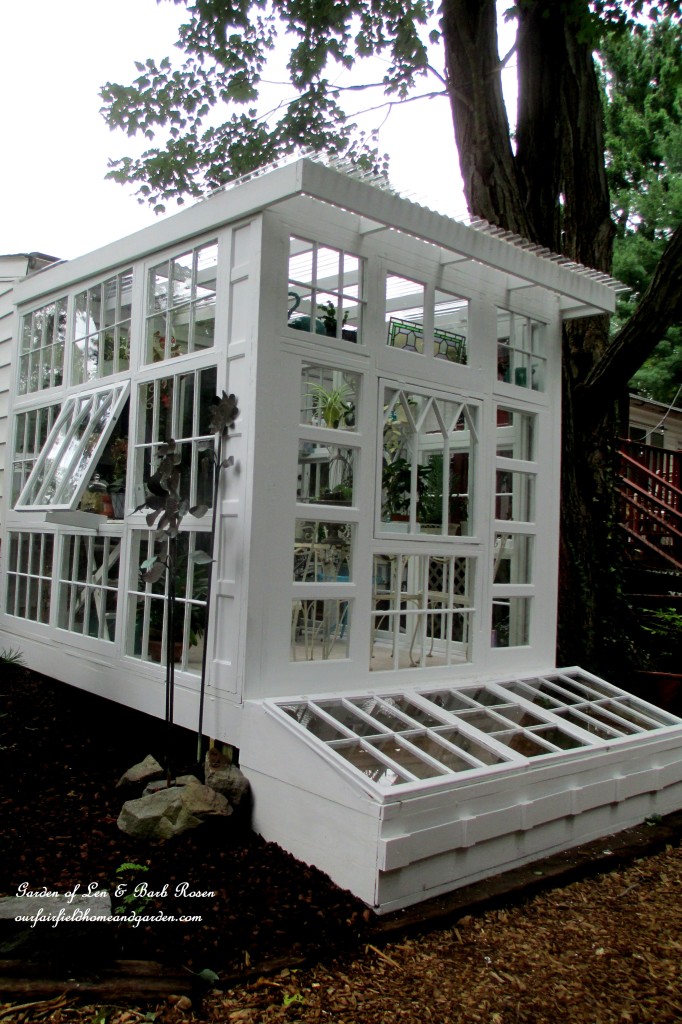 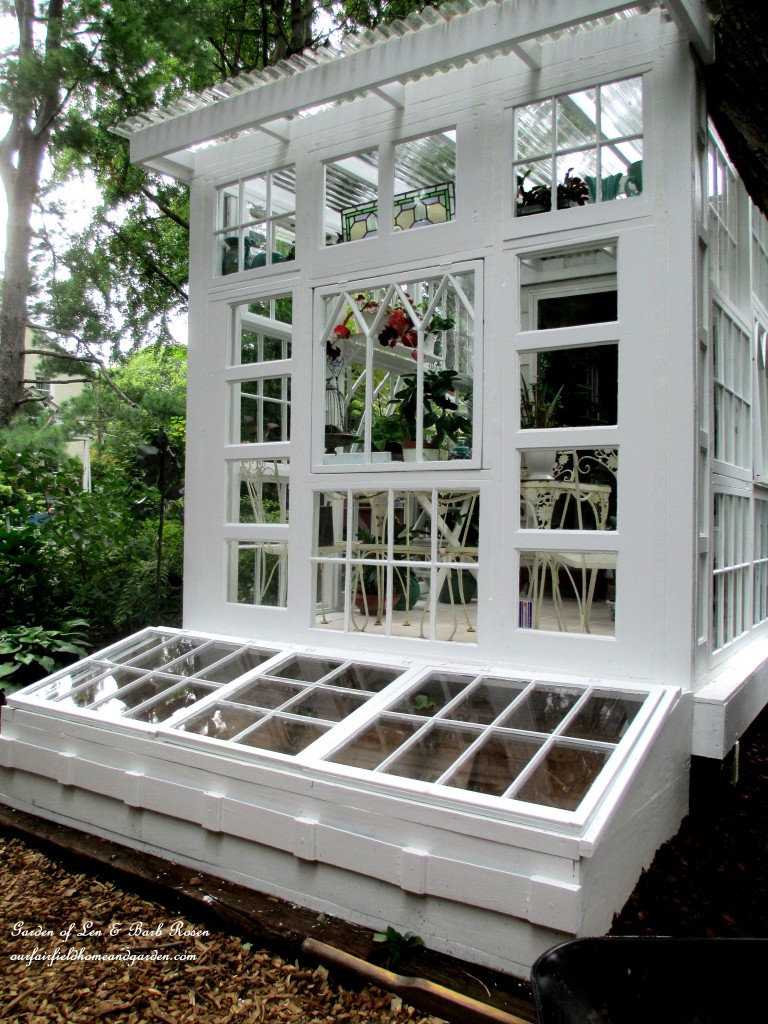 Our greenhouse made the news! Check this out! 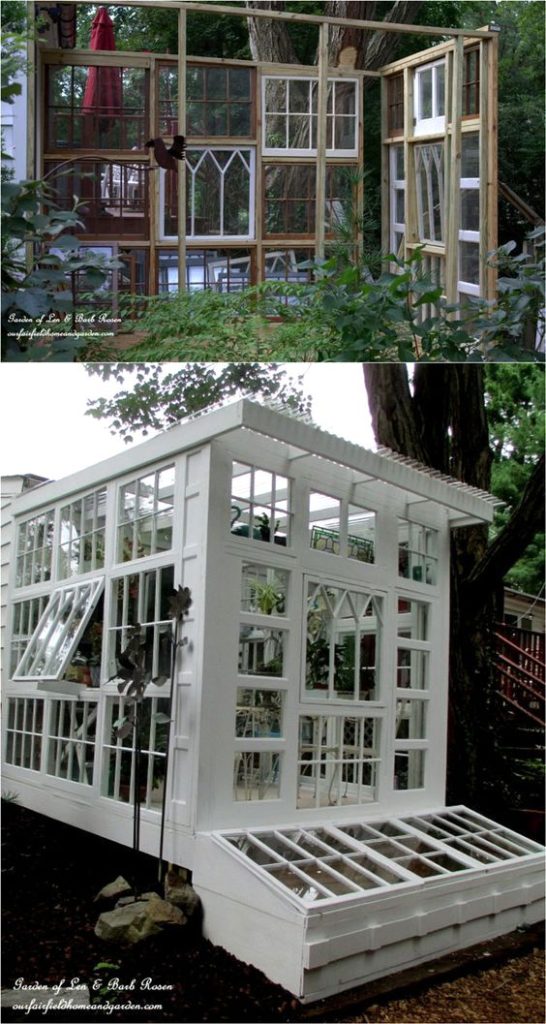 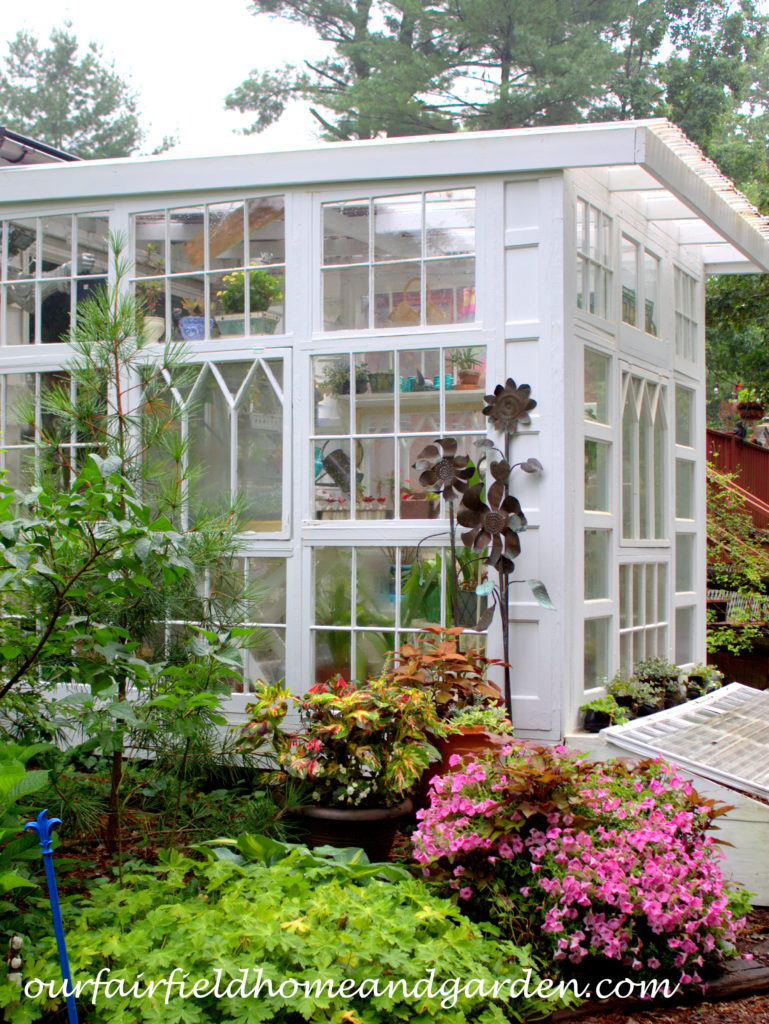 Greenhouse at Our Fairfield Home and Garden (July 2017)

Our Delaware Master Gardeners are preparing one-minute You-Tube spots on various topics. Recently, I was asked to do a “Master Gardener Minute” about our greenhouse. Sure not used to being video-taped, but here it is!