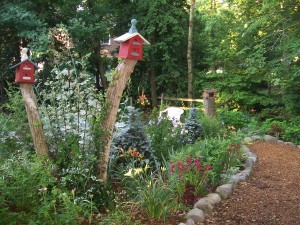 Sometimes  an area that looks like a disaster is really a gem waiting to be polished! This is what I call “The Good Neighbor Garden,”  a side garden adjoining our neighbors on one side of our half acre lot. When we first moved into our home four years ago, this area was the least of my worries. I first put my efforts into the front yard and the curb appeal of our home. This side yard had two half-dead trees and a very overgrown bush which made this a dark, uninviting spot that also shaded our neighbor’s flowerbed to the point that they couldn’t grow much of anything.

Initially, my plan was to tackle it later, because, frankly, the overgrowth was pretty intimidating. But my sweet neighbor, Geri, seeing all the improvements in the front yard announced that she couldn’t wait to see what I’d do with that hideous area between us. Of course, this bumped the side yard up to the top of the priority list and I got rolling.

Fall was approaching and my plan was to just get it cleaned up and then plant the next spring. What I didn’t count on was how it would look after all that mess was hauled away! This was a job for tree specialists, and they cut and removed everything except for the three tree trunks you see in this picture. But removing all that vegetation made it look like a bomb was dropped between our properties! Where we once had a jungle, we now had a no-man’s land! I believe Geri was more than a little horrified, but I assured her that I would get busy planting right away. And plant I did.

The pathways were created by mowing over pachysandra and ivy, laying down landscape fabric, securing it with ground staples and then lining it with a pallet of river stone. Then five yards of mulch was dumped on the new front lawn and I had to scrabble to get it spread before it did damage to the grass! At this point , it looked much tidier and the planting started.

Many of the plants I chose were those that would get large fairly quickly to create a “friendly fence.”  (Rose of Sharon, roses, butterfly bushes, two small blue spruces, beauty berries and plume poppy.)  Then I filled in around with iris, day lilies, hydrangea and other perennials. 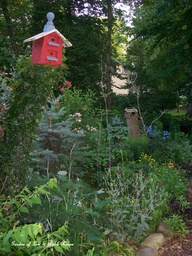 Since I love bringing birds to the garden, I put a trellis between two of the tree trunks, planted lonicera in the middle and placed birdhouses on the tops. Now it was beginning to look like something! My neighbor was so enthused, she put in more plantings on her side of this big shared bed, too.

We have had a lot of fun talking over the flowers, sharing perennial starts and watching the birds that have been drawn to our new garden spot. Birdfeeders, a birdbath, some benches and chairs and more birdhouses have been added on either side of our shared little Eden.

So, here is the Good Neighbor Garden two years later, filled in and an asset to both our properties! A diamond in the rough now showing all its facets. And now … the neighbors on our other side have started a flowerbed to join ours, too!