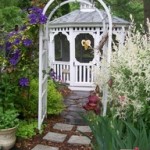 We added a gazebo right away because we missed the one we left behind!

Hard to believe but we just marked our fifth anniversary in our “new” old house. Many , many projects later, we still have a few major improvements to finish. This spring is exterior painting and new garage doors, but we are hiring those done. Even though I’m a good painter and have painted houses before , inside and out, my ladder days are over!

For me, the most rewarding changes  have been accomplished in the landscape. My best friend teased the daylights out of me when we bought a house with “tortured shrubbery” (clipped into box and spiral shapes). But it was a half acre after a tiny lot and, even though two-thirds of it was covered in ivy and pachysandra, I knew there was a wonderful garden waiting to happen. And, there was a garden shed and an extra garage on the back of the house to store all my garden tools, pots and whatnot!

Believe it or not, I have downsized a bit by planting more shrubs and perennials and less high maintenance plantings such as wisteria and akebia vines (got to stay off those ladders, remember?). Many of the plantings are natives or hardy as heck, so watering can be minimized. Tucking two to three inches of mulched leaves around everything keeps the moisture in and the weeds down, too. I plant thickly so there is little room for a weed to grab hold.

There is no grass at all on the sides and behind our home. A large section of the back yard is a fenced and mulched dog yard. Our firepit patio is located there but, otherwise, it is an open space for Labs to run and tussle. Instead of planting grass in the side yards, I made wide flower beds and paths of pine mulch. I don’t know about you, but I’d rather trim and fuss with flowers than cut grass. We keep a small section of lawn in the front so the neighbors don’t get scared, but I am starting to think a picket fence and street bed might be nice!

Some ivy still remains, but new raised beds are usurping some of its space. When I retire in June, I might just go at the rest of it and have it gone for good! In a garden, there’s always something new and another idea to try or chore to be done. This garden should keep me out of trouble for quite a long time! 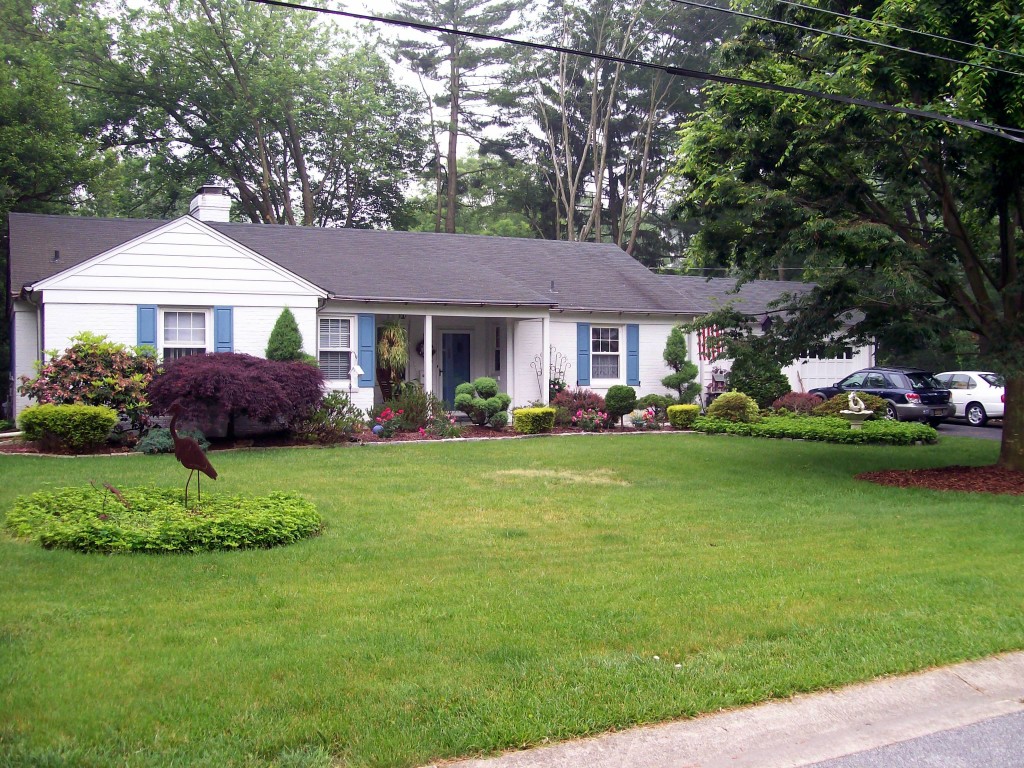 “Before” lots of grass, a few shrubs and the rest of the yard was ivy and pachysandra. 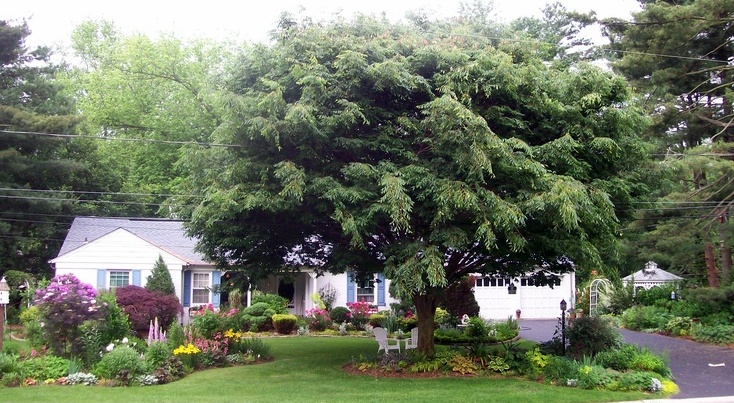 “After” flower beds have been widened, new flower beds added and garden accents such as arbors, a gazebo and birdhouses enhance the landscape. 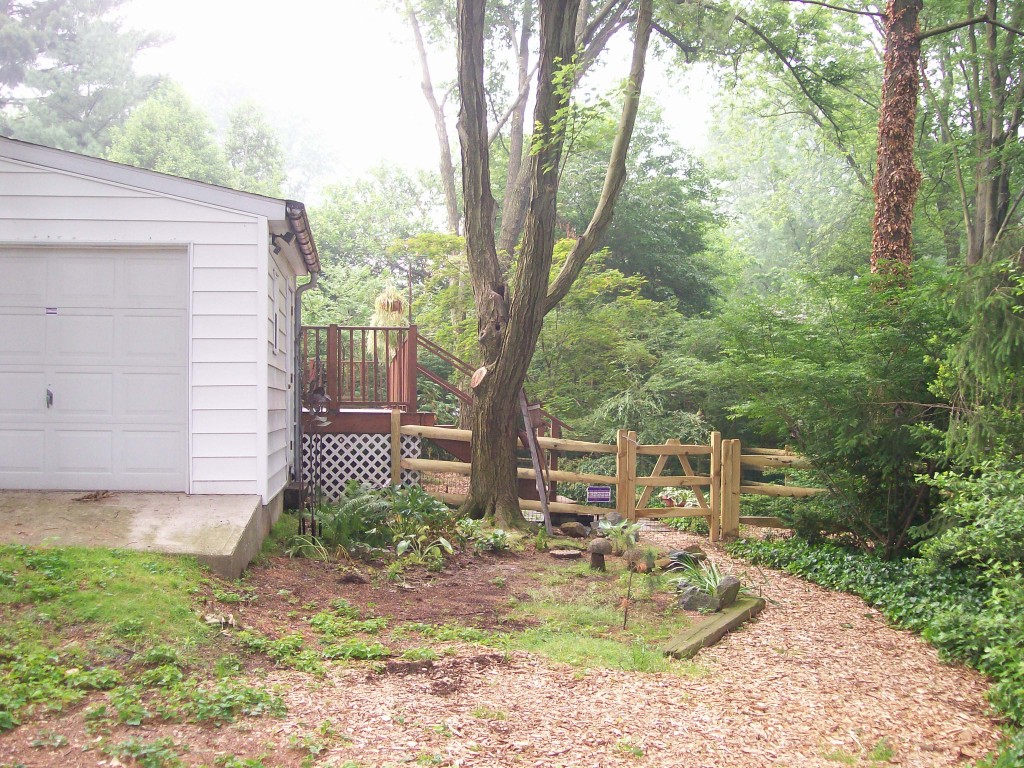 Ivy had been cleared, a mulch path made and a fence put in for the dogs already before I took this “Before” shot. 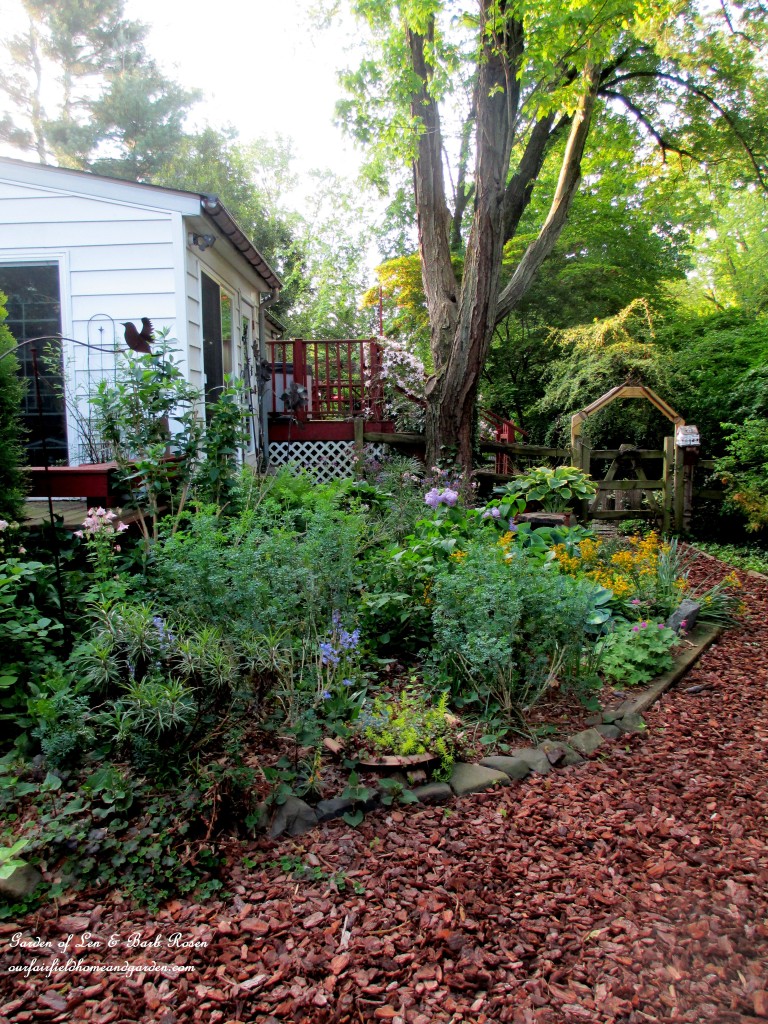 Garden Room replaced the single garage and a shade flower bed and arbor are now part of the scene.