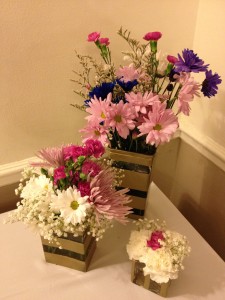 Custom made vases for the gift table.

Upon hearing that flowers for her daughter’s three hour engagement party would run $5,000, my friend, Renee, decided she would do it herself. Or rather, she would enlist my help and the two of us would do the flowers. Simple groupings of vases, with little taped designs and gold spray paint to jazz them up, plunk some flowers in, how hard could that be? Well, we found out! Here is our cautionary tale so you don’t make some of the same mistakes we did! Although it all turned out well in the end, it was more than a notion … Luckily, Renee found the majority of the vases at the Goodwill on their half price day for just $25. The remainder of the 90 vases were donated by friends eager to clear their cupboards and support the cause. The first order of business was to clean them all thoroughly,which Renee did in her dishwasher. Washing and drying the ninety vases took a day. Using a Pinterest picture as inspiration, Renee and the bride-to-be, Rachel, decided the vases should be fairly simple, with stripes and swirls in gold. Each table would have a grouping of three vases as well as vases for the gift table, the buffet tables and the restrooms. Here’s where I came in, the first taping day. Renee had sorted the vases by where they would be used and we started applying masking tape to the vases in striped and swirled designs. The masking tape seemed to stay on better than the painter’s tape, so we did most of the taping with it. (Don’t do this! It was our first mistake!! Use blue painter’s tape!) 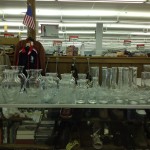 $25 for a large collection of vases at Goodwill on 1/2 price day! 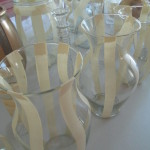 Vases were taped in swirls and stripes with masking tape. 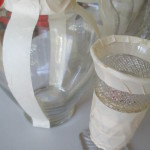 NOTE ~ We recommend that you use blue painter’s tape as we found masking tape sticks to the glass!

It took two sessions of about two hours each to tape the vases and then we were ready to start painting. We laid out a big tarp, upended the vases and began to spray until we ran out of paint, four cans later! That was just the first coat and it was obvious we needed another coat to get the desired effect. We hauled all the vases back inside when they were dry to the touch to let them cure overnight indoors.

So, back to the hardware store. Day two of the painting went well until it started to sprinkle and we found that water and spray paint makes a bit of a mess. Back inside with the vases so they could dry again. Then Renee spent a few more hours scraping off the drips and imperfections caused by the surprise rain. Another coat was applied to the vases that needed fixing and now we could remove the tape. Metallic glitter paint was an effective way to cover the worst of the runs, smears or drips. Stick to the same brand and color of gold paint so your color is the same throughout!

Use a mask when spray painting!! Otherwise, as we found out, you will have golden boogers!

We had used masking tape until we ran out of it and then used blue painter’s tape. Unfortunately, we found out the hard way that masking tape often sticks to glass and we had some more scraping to do. Pulling off the tape also sometimes pulled off some of the paint and we used a gold paint pen to tidy up those spots.

Upend the vases and apply the first coat of spray paint. 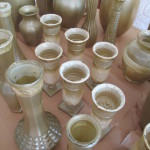 Let “cure” overnight and then apply the second coat of spray paint.

With the vases finally finished, Renee researched and found out the best material to wrap them in is waxed paper! Thank goodness she checked first as we might have wrapped them in tissue paper and had a mess on our hands again! I calculated the amount of flowers we would need, roughly six stems to a vase and baby’s breath as a filler. Two days before the big event, Renee and I got permission to root around in Produce Junction’s walk-in and choose the flowers. A variety of roses, asters, gerber daisies, mums, baby’s breath and carnations were selected and put into two large coolers we had brought with us. At Renee’s, the coolers were filled with water and a bit of bleach and put in a cool room. I drew sketches for Renee so she would have a plan to work from, as I would not be going to New York City with her. From my yard, I gathered 150 lengths of English ivy and 100 lengths of creeping jenny, then cleaned and conditioned the strands and placed them in two buckets. That evening, I dropped them off at Renee’s house, wished her well and made her promise to take lots of pictures. So, $25 for vases, $96 for spray paint (8 cans of metallic and 4 cans of glitter ) ,$150 for flowers and  about 24 hours of combined work time all added up to $271 spent . That’s a savings of $4,729 ! By all reports, the vases looked so professional that folks asked who the florist was and commented that similar vases in HomeGoods cost about $30 a piece!  The love we applied to the task was priceless and very much appreciated by the betrothed couple. These sweethearts made a very touching gesture and gave the vase bouquets as party favors to the ladies in attendance at the end of the brunch. Renee kept twenty vases for the bridal shower for which we will also be doing the flowers. But, I told her, we are not doing the wedding! Come see the pictorial history of this event! 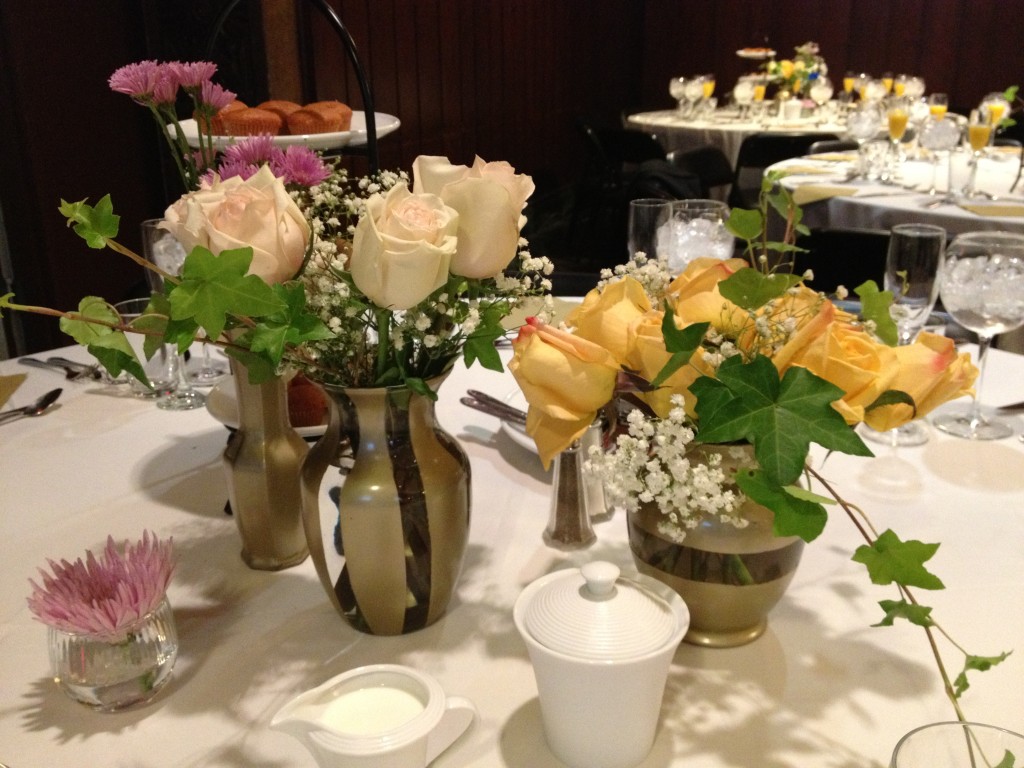 Groupings of filled vases on the buffet tables. 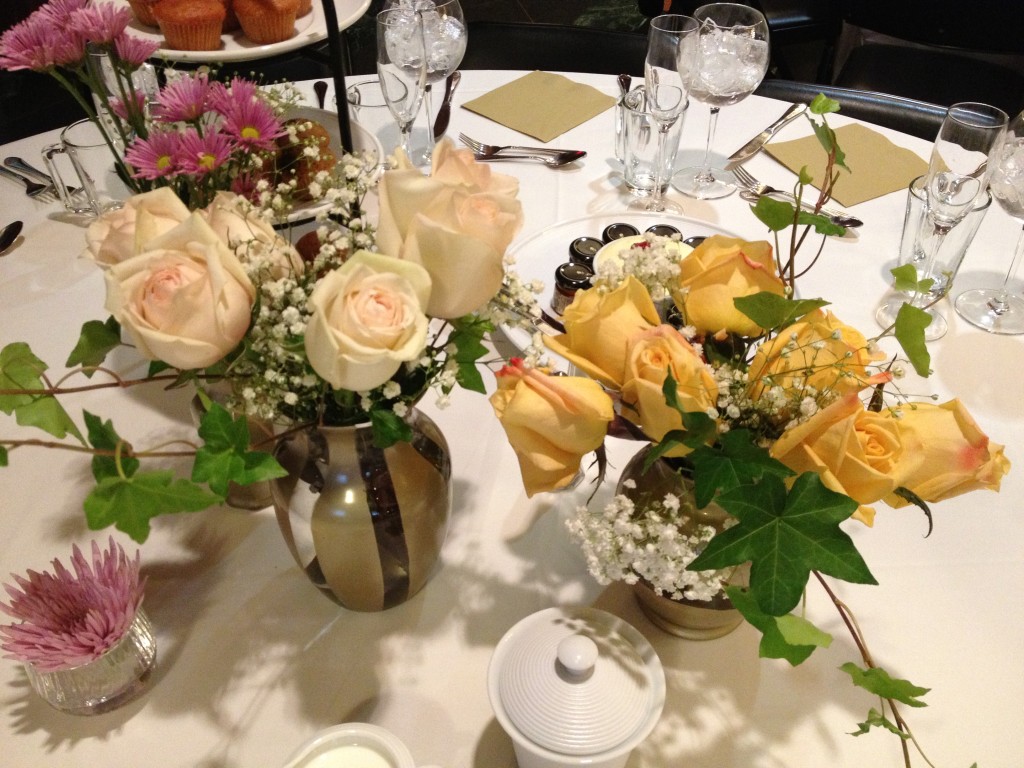 The ivy gave it hat something extra and made it look very custom. 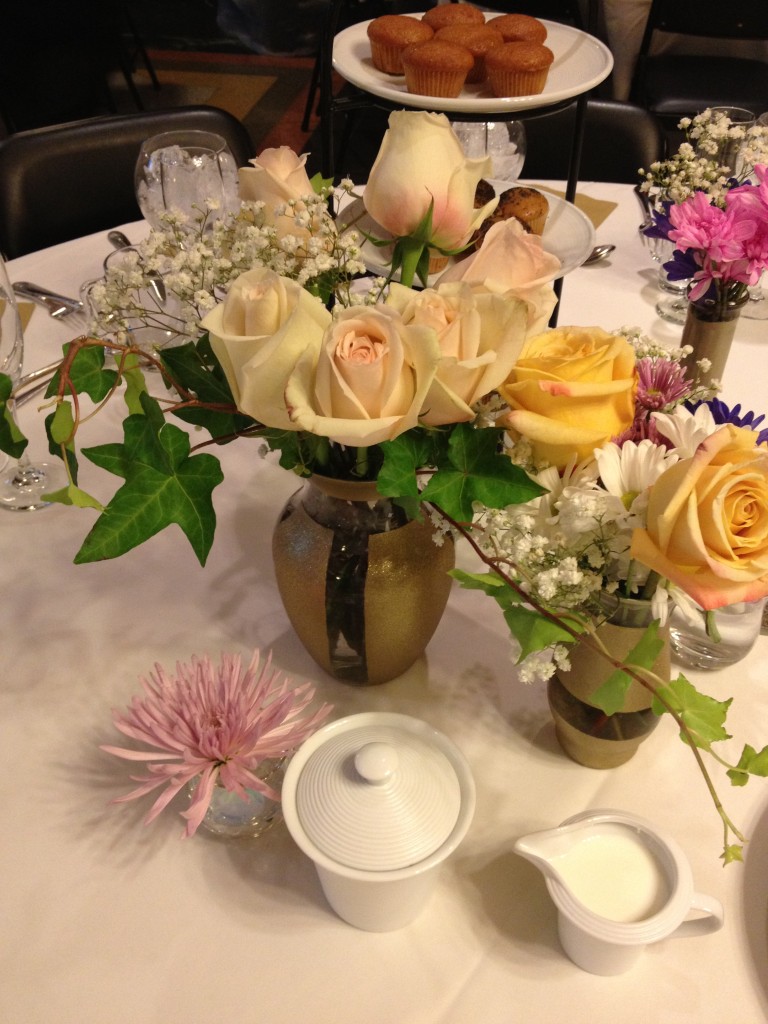 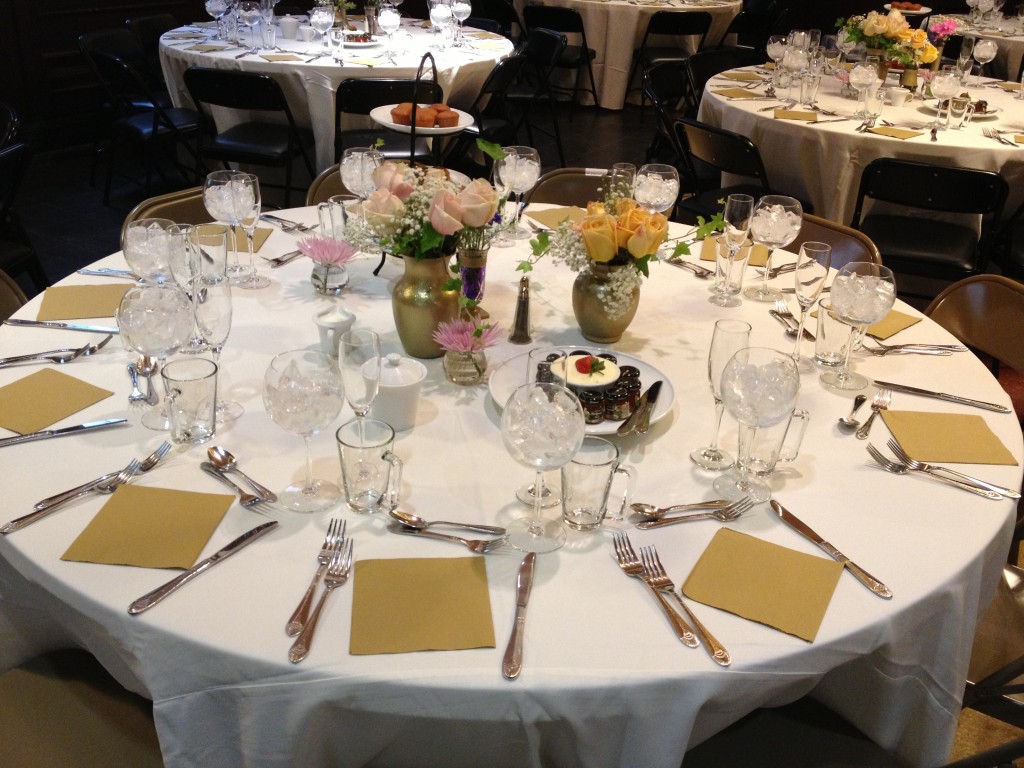 Matching gold napkins were used on the tables to create an elegant look. 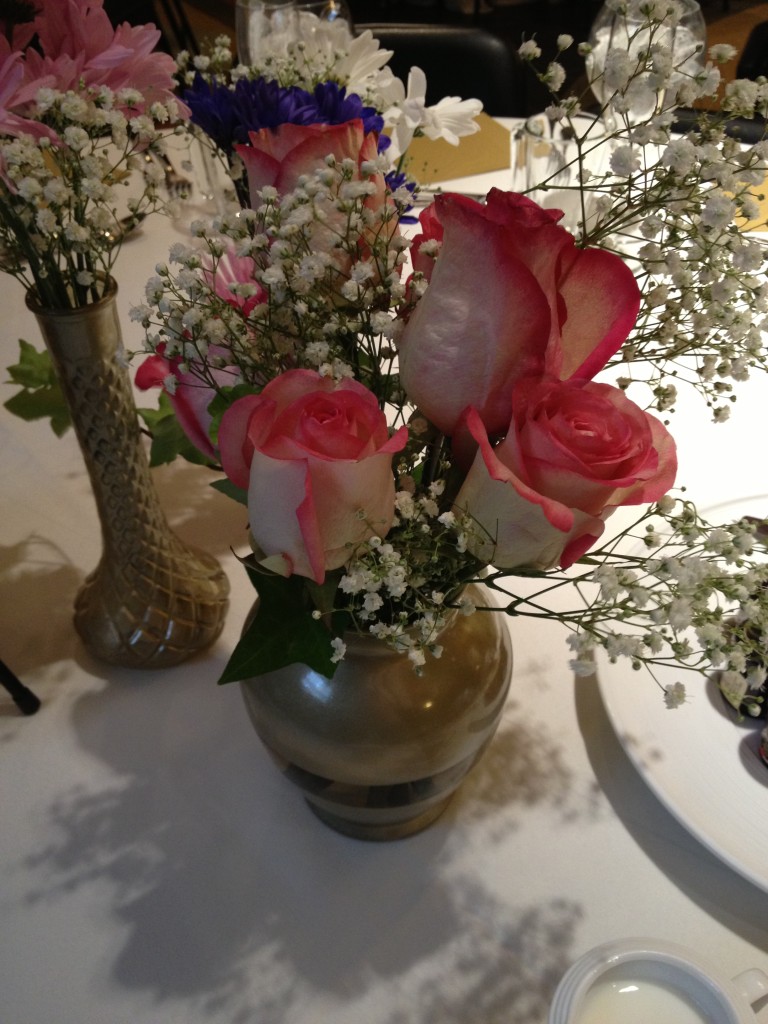