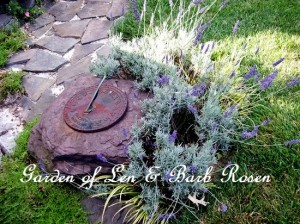 Today I’m taking you with me on a trip down memory lane to my former garden. Our brick split-level sat on a seventy-five by one hundred foot lot in a development established in the 1950s and looked pretty much like all the other homes around us. Over the course of thirteen years, using landscaping , paint and accents, we transformed this cookie-cutter house into a country cottage home.

Each year, I planned one or two big projects such as new flower beds, house painting, a block driveway or a Bluestone patio. We did whatever we had the skills and muscles for and hired a few of the jobs out. But mostly the change evolved from the landscaping and details. Both side yards were only ten feet wide, so a Garden Display ladder and stone foot path went on one side with an entrance to the garden. The other became a flower bed.

Garden rooms were established in the back yard by creating arbors, nooks and seating areas with plantings to complement them. Fencing and Arborvitae shrubs were put in to enclose the back garden. Winding  flowerbeds were edged in river rock, and the grass paths were mulched to reduce mowing and watering. Accents and salvaged items were tucked in among the flowers to be discovered by visitors as they walked the garden. Many of those surprises and projects were created from items my husband and I found at yard sales and on neighborhood trash days!

When I ran out of space, vertical plantings of clematis, wisteria, kiwi vine, window boxes and ladders were used to make this little space appear larger. Vegetables and herbs were planted right along with the flowers and shrubs. Plant selections were made to include native plants and incorporated over four hundred flower, shrub and bulb varieties, documented when we became a certified Backyard Habitat Garden.

This tiny garden was a joy to me, open to our friends and neighbors and was even featured on several garden tours. But time marches on. All those steps inside and outside and the sloped front yard made this a home we realized we could not grow old in. Five years ago, we began making a new garden and an older ranch home our own.

But , once in a while, I have to look back and remember that lovely little garden which I’ll always carry in my heart. 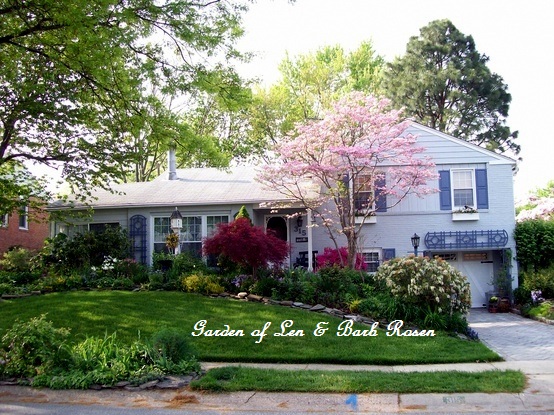 After ~ what a difference some paint and plantings can make ! 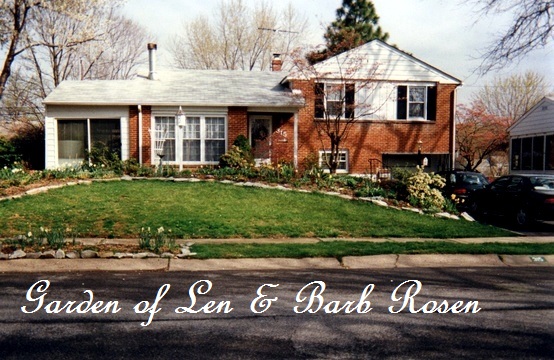 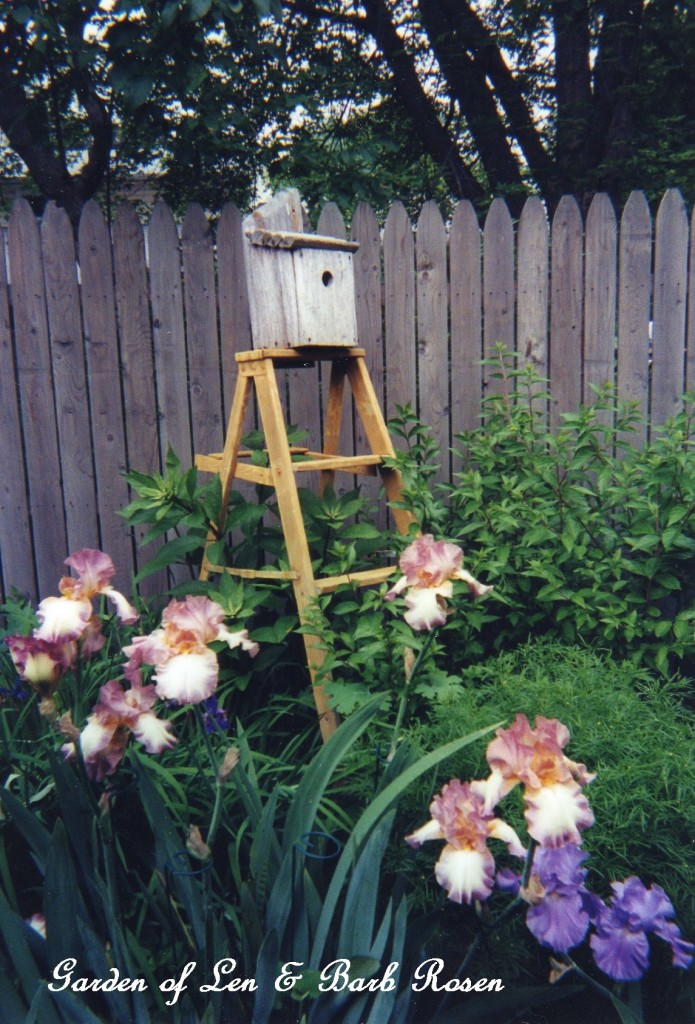 birdhouse ladder and iris in the back garden 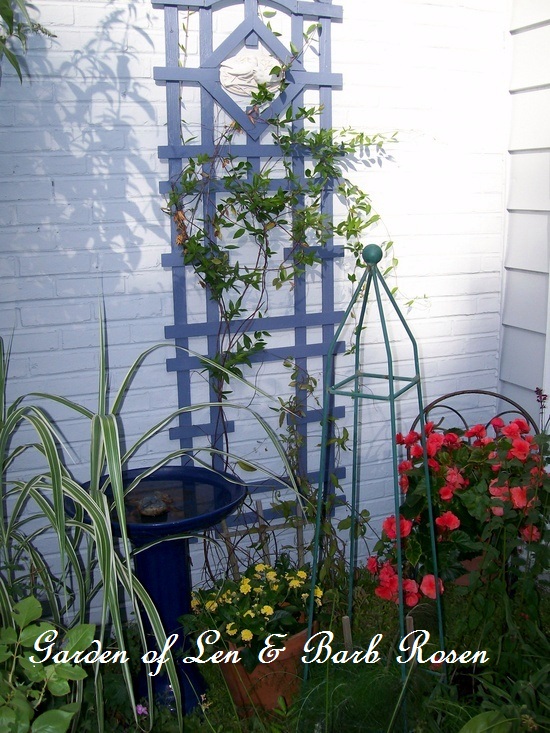 pocket garden by the sunporch 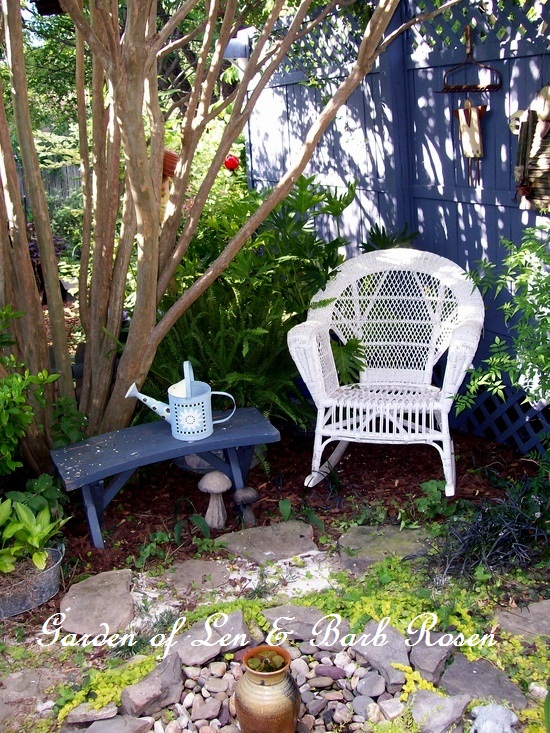 shady nook with a bubbling vase 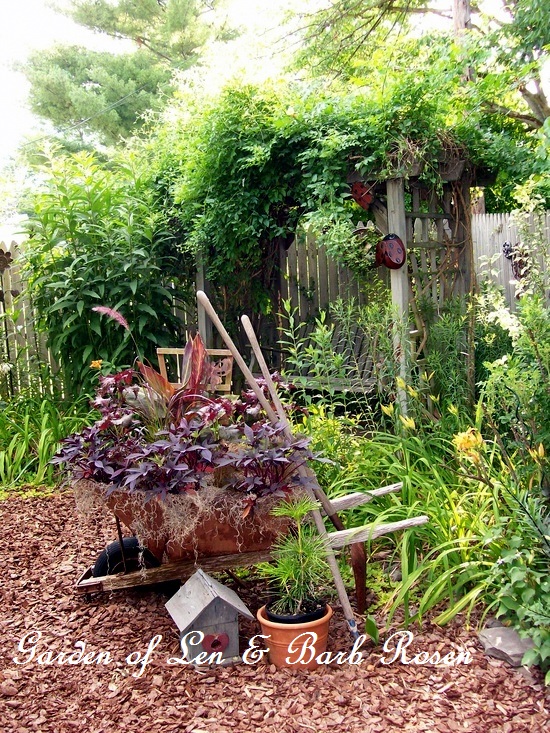 Wheelbarrow planting by the arbor swing 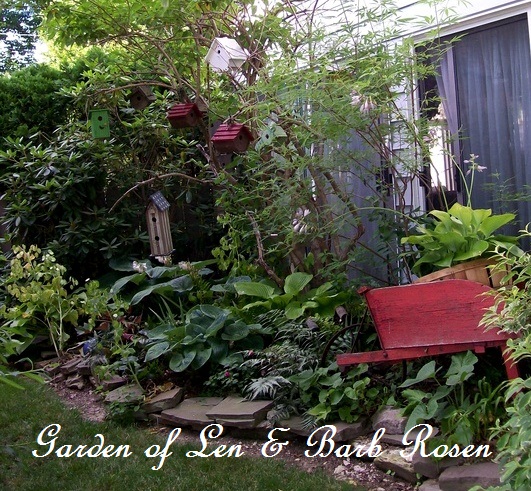 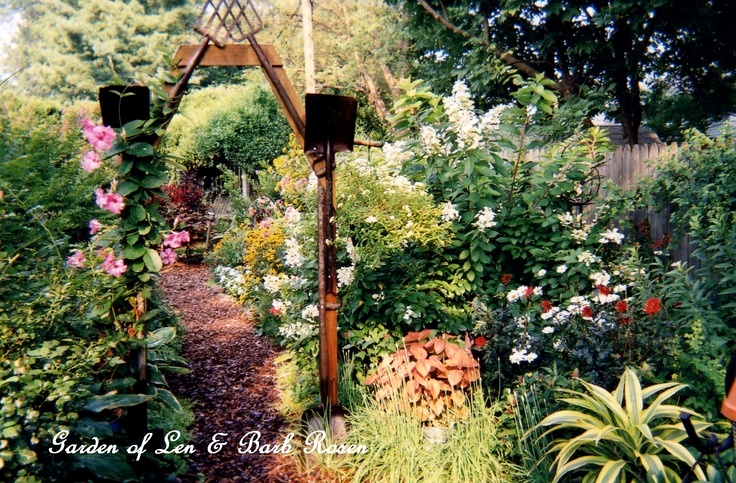 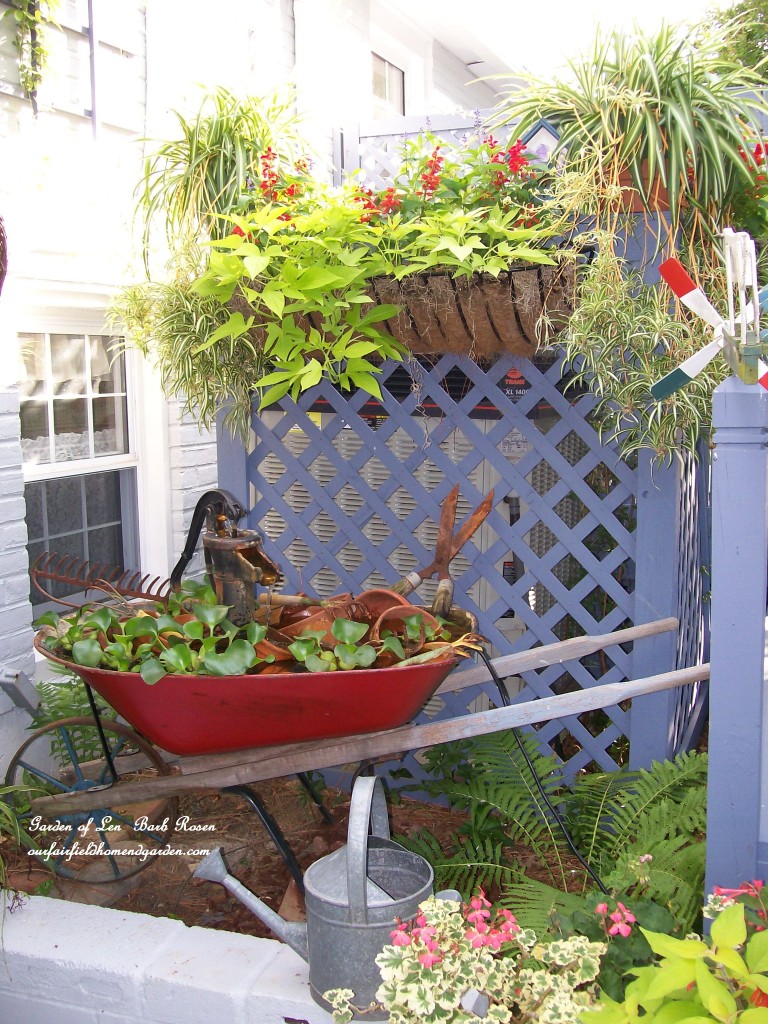 The Garden Shed and Bluestone patio 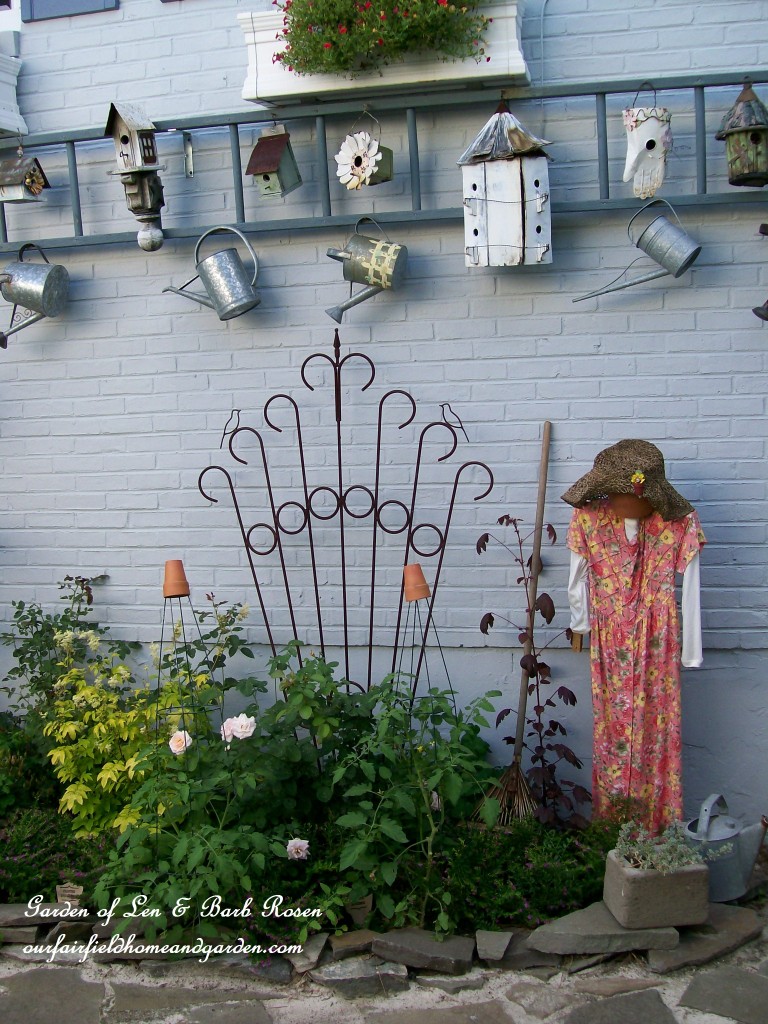 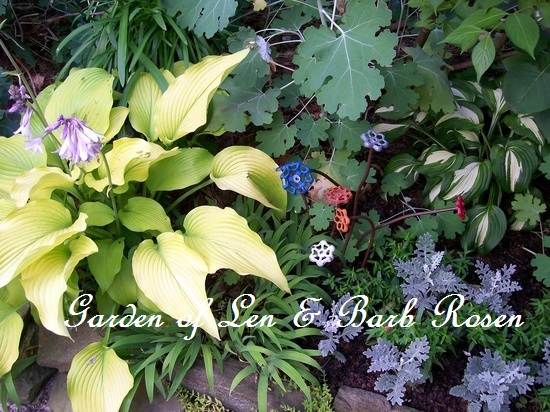 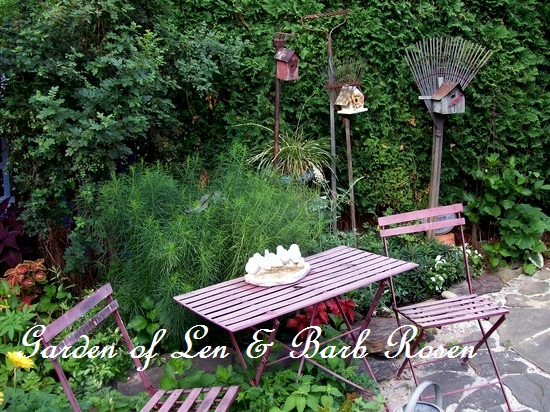 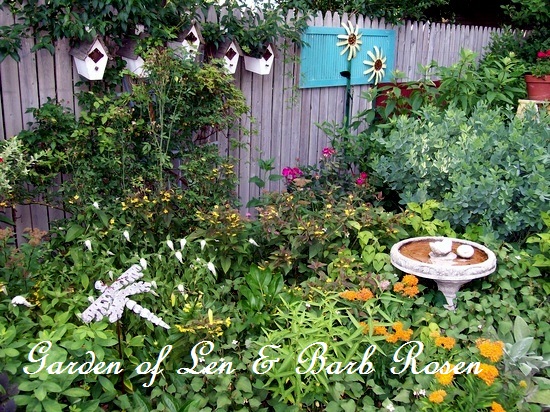 back fence garden and birdhouses 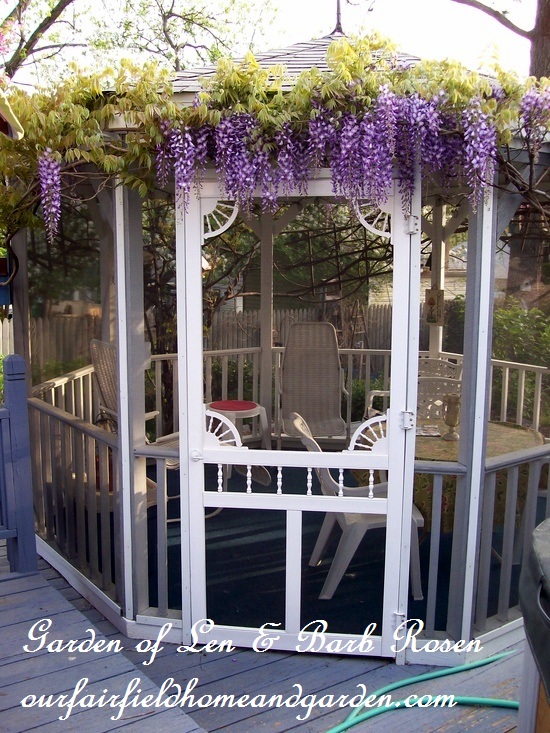 Wisteria on the gazebo in spring 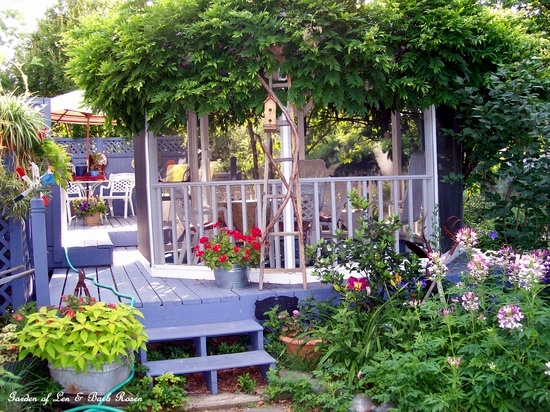 Gazebo & back deck in summer 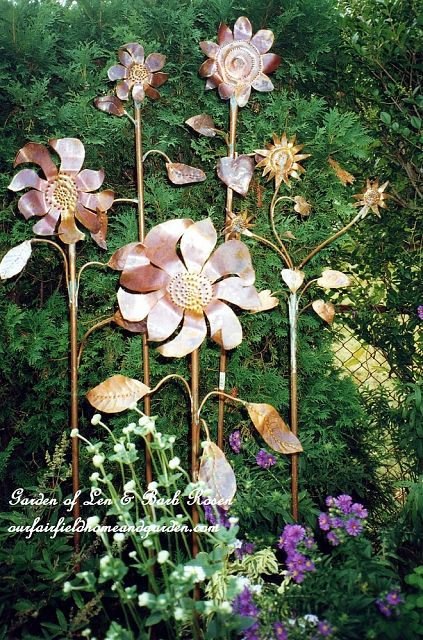